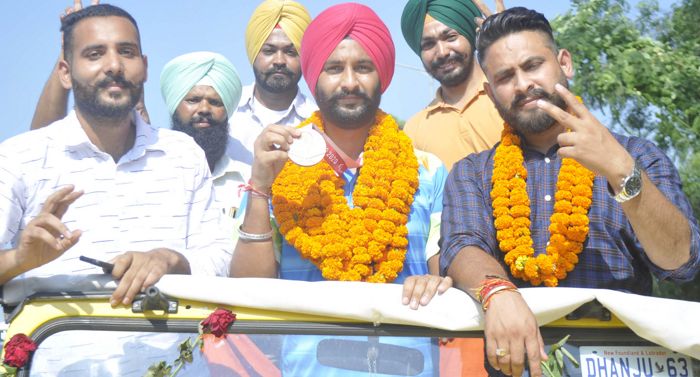 Paralympic bronze medallist Harvinder Singh Dhanju, who once contemplated quitting archery over low performance, now has his eyes on the Senior World Championship, scheduled to be held in Dubai in February next year. He is the first Indian to bag a medal in archery in Paralympic Games.

The archer today reached Punjabi University campus where a felicitation ceremony was organised to welcome him. A rally was held from Gurdwara Sahib, Bahadurgarh, which reached the university campus with all pomp and show.

While talking to The Tribune Harvinder said he was elated at his achievement and aimed to perform better in the future. “I am happy that I have won a medal for my country. This was possible with the support of my family, coaches, university and the government. Soon, I will start training for the World Championship, which will be held in Dubai,” said Harvinder.

He had started practising archery on the university campus in 2013, Harvinder added. “Since then we faced a number of challenges. Initially, my performance was not upto the mark. I planned to quit the game, but my coaches decided to change my event from compound to recurve. Thereafter I started performing better. Also, my coaches arranged costly equipment from the university for me, which gave me much needed boost,” said Harvinder

Talking about the Tokyo Paralympics Harvinder added, “Indian players managed to win 19 medals in Paralympics this year. This number is more than all medals Indian players won in earlier Paralympics. It shows that the government has invested in sports during the last few years.”

The young medallist had once decided to leave the sport during his training days.

His coach Gaurav Sharma said, “We instead changed his event from compound and started training him for the recurve category. Later, he competed in the International Paralympic Games 2017 held in China. Later in 2018, he became the first player to win gold medal for India in Asian Para Games. Now, he has made history by bagging India’s first ever medal in archery.”