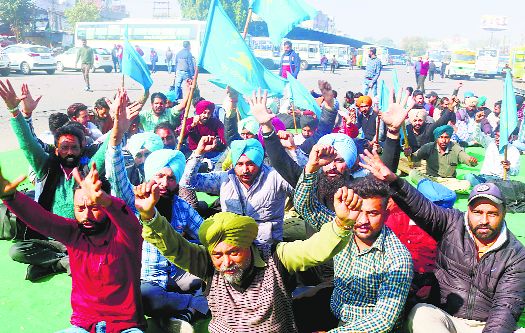 Commuters to neighbouring cities and states were left stranded as contractual staff of the PRTC and the Punjab Roadways began an indefinite protest over their demand of regularisation of jobs today. Over 3,300 contractual workers, including drivers, workshop workers and clerical staff, remained off the jobs. The workers said the announcement of the strike was made after the matter had earlier been raised with the Transport Minister.

They said, “The state government had given us assurances that our matter will be taken-up in the first Cabinet meeting led by Chief Minister Charanjit Singh Channi.”

Harkesh Vikki, president of the contractual workers’ union, said the workers associated with the PRTC and Punjab Roadways shut all work for the day. “We have decided not to get back to jobs in the wake of the state government’s failure to regularise our services. We have met them numerous times but have only received assurances as the matter has not even been discussed in two Cabinet meetings yet,” Harkesh said.

He said the workers held a strike throughout the state. Only five per cent buses driven by regular drivers of the PRTC and Punjab Roadways plied on the roads. “This includes more than 200 busses that run from Patiala bus stand remained off the roads. The PRTC which makes around Rs 1.75 crore daily in turnover has already suffered a loss of Rs 1.50 lakh with the day’s protest. All long route buses, including those going to Jammu, Delhi, Haryana and plying on other routes were off road,” he said.

Commuters remained stranded on city and state highways. They were forced to turn to private vehicles, which were more costly. Workers said thousands of commuters travel by buses from Patiala city alone.