Project will be carried out under Centre’s Clean Air Programme 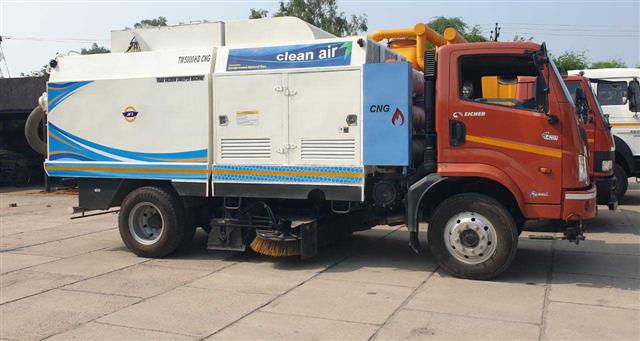 One of the machines that will be used to sweep roads in Patiala. Tribune photo

The Municipal Corporation (MC) will sweep all roads in the royal city with a one-time grant of Rs 3.19 crore, part of which has already been received from the Central Government. MC officials said the project to be carried out under the Centre government’s flagship National Clean Air Programme (NCAP), launched in 2019, would help reduce air pollution in the city. The focus would be on removing dust and sand on bituminous roads with water, officials said.

“The civic body has already received part payment of Rs 2.59 crore for the project and will soon float a tender for this purpose,” officials added.

“The corporation has identified 224 km stretch of roads in the city to be cleaned with machines 26 days a month. One machine will cover a distance of 112 km in a day. Two machines will function simultaneously as per the devised plan,” said officials.

“We will pay company, which will be allotted tender, Rs 456.61 for cleaning per km of road. The total amount, which the MC will pay every day to the firm for cleaning all roads in the city, is Rs 1,02,280. A few companies have already given their demo,” officials added.

“After the implementation of the project, the MC will use services of the remaining safai karamcharis to clean internal city roads. The corporation has nearly 900 Class IV workers of which 600 are safai karamcharis,” said officials.

“The Central Government will provide Rs 3.19 crore one-time grant under the NCAP project, which was launched as a long-term, time-bound and national level strategy to tackle the air pollution problem in a comprehensive manner. The government aims to achieve 20 to 30 per cent reduction in particulate matter concentrations by 2024, while keeping 2017 as the base year for its comparison,” officials added.

“The government has also identified 122 non-attainment cities across the country, which includes Patiala, along with Jalandhar, Khanna, Ludhiana, Pathankot, Amritsar, Khanna and others in Punjab based on the air-quality data from 2014-2018,” said officials.

Municipal Corporation Commissioner Aaditya Uppal said sweeping would done with the help machines. This would be entirely different from normal sweeping, he said.