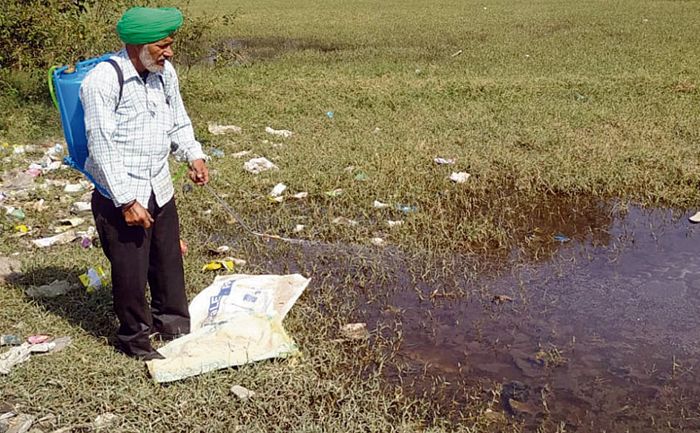 A health worker sprays a larvicide in a puddle in Rajpura. Tribune photo: Rajesh Sachar

The Health Department has identified 30 hotspots in the district and has requested the Municipal Corporation (MC) and the Patiala Urban Development Authority (PUDA) for extensive fogging in these hotspots.

Health officials said fogging was a must to curb the spread of the disease.

It has been learnt that the Health Department, after receiving complaints from residents that no fogging was being done, has requested the MC and PUDA for carrying out fogging in the hotspots twice a day.

However, the MC Commissioner has dismissed the allegations and claimed that fogging was being carried out by their inspectors daily in the hotspots.

The Commissioner said, “There is a fogging roster that covers the entire city in a week. Therefore, each area is covered once a week. Our officers are conducting fogging in the hotspots on a daily basis.”

Dr Sumeet Singh, district epidemiologist, said a majority of the fresh cases were reported from the hotspots only. “Since, the hotspots are continuously reporting positive cases, fogging is required. Besides, health officials are aggressively tracing contacts of dengue patients.”