Say will intensify protest if demands not met 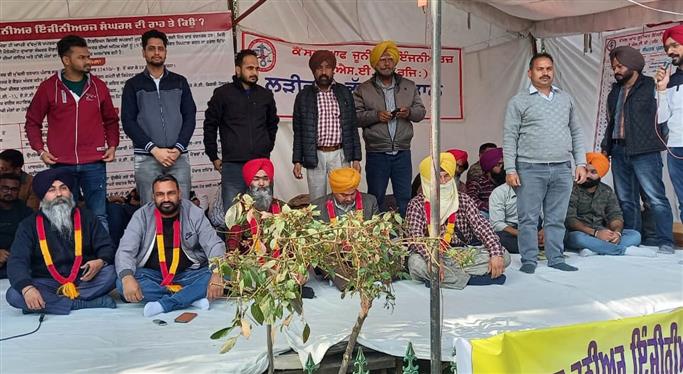 Members of the Council of Junior Engineers sit on a hunger strike in front of the PSPCL headquarters in Patiala on Monday.

A group of five junior engineers of the Punjab State Power Corporation Limited (PSPCL) from the Kapurthala Circle Unit of the council, sat on a 24-hour chain fast in front of the PSPCL headquarters in Patiala today for the 13th consecutive day.

The main demand of the protesters is enhancement in the initial pay of the power junior engineers from Rs 17,450 to Rs 19,770, as per the pattern of the state government departments officials, who have been drawing Rs.18,250 from December 1, 2011.

Acoording to the council leaders, the PSPCL junior engineers had been placed in ‘group 13’ of the general pay conversion table, but they were supposed to be placed in table number 17 with initial pay of Rs19,770.

The members of the Council of Junior Engineers said if the PSPCL failed to settle the assurances given to them in the meeting on November 17 within a fixed time frame, they would intensify the agitation.