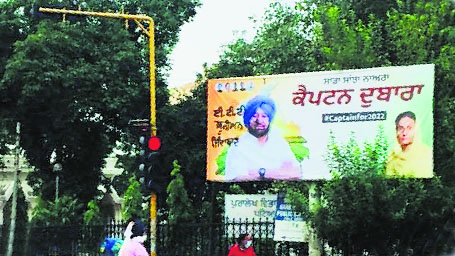 A hoarding of Punjab Chief Minister Captain Amarinder Singh in Patiala that was allegedly defaced by members of the ETT Teachers Union. Tribune photo: Rajesh Sachar

Hoardings installed at various places across the city were found defaced today.

Hoardings were found defaced at YPS Chowk, Fountain Chowk, near Mata Kaushalya Hospital on the Mall Road and at several other places.

Slogans seeking justice for ETT/TET teachers including Surinderpal Singh, who has been protesting atop an overhead water tank for over four months now, were scribbled on the flex boards, many of which have been installed illegally.

Sandeep Sama, leader of the ETT Teachers’ Union, though said the body was not responsible for any such action.

“Some unknown members of the union must have defaced the flex boards over the dismal condition that Surinderpal has been left in. The ETT Teachers’ Union does not have anything to do with the defacement,” said Sama.

He said over 13,000 to 14,000 ETT/TET pass teachers were working in the state. “We can’t take responsibility for all the members. We did not plan such an action. All our steps are in accordance with the law,” he added.

SHOs of the Lahori Gate and Civil Lines police stations said the police did not receive any complaint in the matter.

SHO, Lahori Gate, said, “We are still probing the matter… We will find out who has defaced the flex boards.”