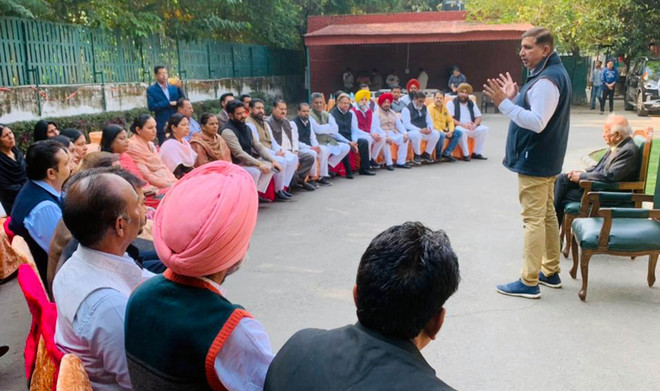 Councillors during a meeting at the Chandigarh residence of Cabinet Minister Brahm Mohindra on Thursday. Tribune photo

Councillors of the Patiala Municipal Corporation today said they had no confidence in Mayor Sanjeev Kumar Sharma. As such, 42 councillors (of 60) have demanded his resignation and asked him to call a general house meeting to prove majority.

The Mayor in turn trained guns at Local Government Minister Brahm Mohindra, accusing him of instigating the councillors. He said he would prove majority in the general house. Insiders suspect horse-trading from both sides.

The ‘rebel’ councillors held a meeting with Congress general secretary Harish Chaudhary and Mohindra in Chandigarh for over two hours. A parallel meeting was organised at MP Preneet Kaur’s New Moti Bagh Palace, where, sources said, over 17 councillors were present.

The councillors in their no-confidence notice to the Mayor, a copy of which was forwarded to other officers and the CM, said: “Almost all members of the House have lost confidence in you. It would be appropriate for you to resign on moral grounds.”

Talking to The Tribune, councillor said: “We have lost confidence in the Mayor due to his ‘anti-party’ activities. We stand with the party and will accept its decision. Nearly 40 were present at the meeting in Chandigarh today.”

On his part, Mohindra said: “The party high command had given a go-ahead to the councillors to take their decision for the betterment of the city. Now, the onus is on him (Sharma) to call a meeting.”

Sharma accused the minister of instigating the councillors to ensure a party ticket for his son from his constituency. He said: “Mohindra acted as a dictator in 2020 also when he shifted 26 wards from the MC to the Improvement Trust. Councillors’ rights were stolen.” Rejecting the councillors’ demands, he said: “I will prove majority in the general house.” — TNS