Patiala Mayor rides on the wrong side of law 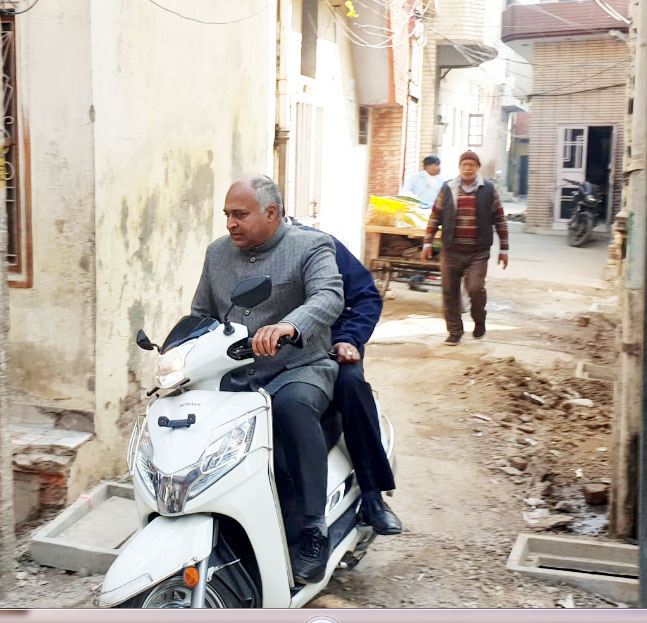 Patiala Municipal Mayor Sanjeev Kumar Sharma on Monday, no challan has been issued to him yet for riding a two wheeler without a helmet and a registration number plate. Tribune photo

Two days after Patiala Mayor Sanjeev Sharma Bittu was caught driving a two-wheeler without a registration number and without wearing a helmet, the city traffic wing has failed to take action against him.

So far, no challan has been issued to the Mayor for violating the traffic rules — riding a two-wheeler without a helmet and a registration number plate.

“The police should lead by example. Rules are the same for everyone,” said a resident. In photographs that have gone viral, the Mayor is seen going around the city to oversee development works on February 8.

The Mayor visited the Top Khana Gate, Kashmiri Toba, Kachha Patiala and Purana Lal Bagh areas among others. Though he reportedly pulled up the municipal engineering team and questioned lapses and delay in executing the works, he himself forgot to obey the traffic rules. He and another corporation official riding pillion did not wear a helmet.

The two-wheeler also did not have a registration number plate. The incident has taken place at a time when the traffic police are observing road safety month. The police have been organising events and distributing pamphlets regarding traffic rules among residents.

Meanwhile, the Mayor said: “I was caught in the traffic because of which I had to ride a two-wheeler. Also, roads in the city have been dug up for various works.” He said he had to commute for more than 15 km on foot to reach various sites in the city.

City traffic in-charge Yugraj Singh said he did not receive any information regarding the traffic violation. “I am not in the city. I will return tomorrow.”

Achru Ram, DSP (Traffic), Patiala, said he was not even aware of the matter. “I will look into it,” he said.