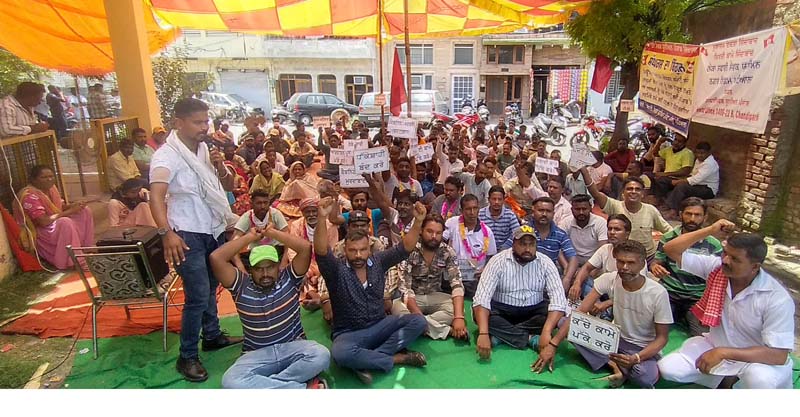 Members of the Cleanness Worker Union protest in support of their demands in Patiala on Wednesday. Tribune photo: Rajesh Sachar

Sanitation workers of the Municipal Corporation (MC) today stopped all work to protest for regularisation of jobs. Workers blocked gates of the MC Fire Department and stopped all sewer and garbage related works inconveniencing city residents.

Meanwhile, another protest was held for regularisation of jobs by members of the Punjab Sanitation Workers Federation outside the city bus stand. They held a protest march till Fountain Chowk in the city.

Sanitation workers associated with the Cleanliness Worker Union Punjab have been protesting for various demands, including regularisation of services. They gathered in large numbers at gates of the fire brigade office and raised slogans against the Municipal Corporation.

Sunil, city unit president of the workers, said, “Earlier, we had announced to stop all cleanliness work if our demands were not met. Sanitation workers have been working for residents on minimum payment for years’ altogether. They deserve proper salary. The state government has not yet accepted our demands and as such more protests will be held.”

Workers stopped all sewage and garbage disposal and cleaning work in the city, he added. “We will continue protest till our demands are not met and jobs regularised,” he said.

Workers on contract, daily wages and outsourced employees of various grades also held a separate protest at the city bus stand. Those associated with the Punjab Sanitation Workers Federation and civic body employees participated in the protest.

Chandan Grewal, state president, Punjab Sanitation Workers Federation, said, “The state government has been exploiting workers. They are not paid minimum wages. Recruitment for various posts in government departments has been stopped.”

Protesters marched till Fountain Chowk where they submitted a memorandum to officials of the district administration.