3 members of robbers’ gang confess to crime during probe 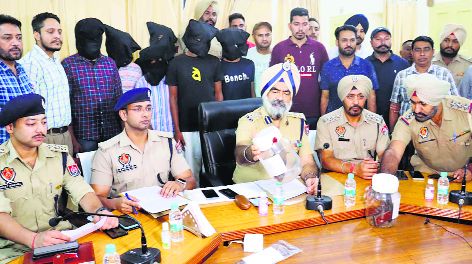 With the arrest of six members of a robbers’ gang, the district police claimed to have solved the blind murder of Sukhchain Das, who was shot dead by unidentified persons on October 6.

At a press conference today, Patiala SSP Harcharan Singh Bhullar said three members of the gang shot dead Sukhchain Das near Sudhewal village in Bhadson block of the district on October 6. The victim was returning home on his motorcycle around 9 pm. He said the gang members were involved in robbing people during night. The three gang members involved in the murder have been identified as Mehnga Singh, Kamalpreet Singh and Ravinder Singh, while their other three accomplices have been identified as Jagseer Singh, Angrez Singh and Manpreet Bawa.

The accused admitted the murder of Sukhchain Das during the investigation in another case, the SSP said. He said that CIA staff in-charge Shaminder Singh and his team yesterday arrested six members of the gang during special checking at the Samana bypass near Passiana.

The police recovered two pistols, two knives and iron rods from them. The police said they had also recovered two bullet motorcycles and one Swift Dzire car from the gangsters.