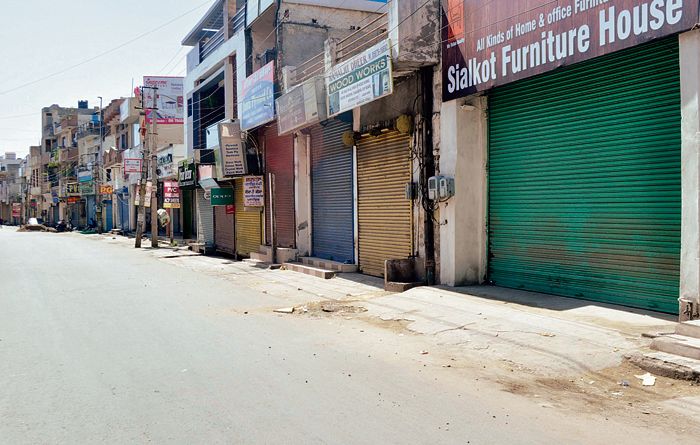 A market wears a deserted look during the weekend lockdown in Patiala. Tribune photo: Rajesh Sachar

Markets wore a deserted look as movement in the city was almost negligible today. Residents remained indoors as per the state government’s directions to check the surge in Covid-19 cases. The Sunday market, which is usually abuzz with shoppers and vendors at Choti Baradari, was also vacant.

Meanwhile, 20 deaths from Patiala and elsewhere have been reported at the Government Rajindra Hospital due to Covid-19 in the past 24 hours while the number of positive cases continues to rise.

While only delivery boys delivered food items from restaurants and other eating joints to homes, dining remained suspended throughout the day.

The Leela Bhawan market, Choti Baradari area, AC market, Tripuri area among other places witnessed nearly no movement all day long. Similarly, the malls also remained shut while the police officials maintained order and patrolled areas of the city. As such, roads and streets all wore a deserted look. A few liquor shops though continued to sell liquor through holes made on the front shutters. A liquor vend situated near the Sheranwala Gate was seen selling liquor from two small holes made in the shutter.