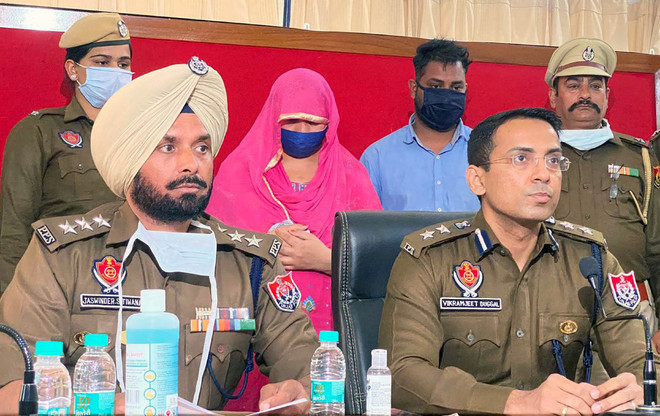 The accused in police custody in Patiala. Tribune photo

A less than 30-second call and some technical details led the Patiala police to solve an over year-and-a-half-old double murder case with the arrest of a woman and her paramour. The police today nabbed the mother of two and her lover on the charge of murder.

Patiala SSP Vikramjeet Duggal said Manjit Kaur and her paramour Baljit Singh hatched a conspiracy to kill the two children as they felt they might come in the way of their marriage in future.

“Baljit Singh took the children along on the pretext of a joyride and showing them the canal waters, where the kids would play and enjoy. As they reached the banks of the canal, Baljit pushed them into the canal,” said Duggal.

In July 2019, the disappearance of two siblings from Kheri Gandian village of Ghanaur block in the district had led to huge protests against the police. The infamous case hogged limelight in 2019 when brothers Hasandeep and Jashandeep, aged six and 10, respectively, went missing and later, their bodies were recovered from the Sarala head of Bhakra canal, but the family did not identify the bodies.

Insiders said clinching evidence was found in which Baljit, who was working at his shop, received a phone call spanning a few seconds just half hour before the murders. Later, the number was switched off. “Investigations found that the call was made from a SIM card issued to Baljit, which he had given to Manjit. He later confessed to his crime,” they said. — TNS