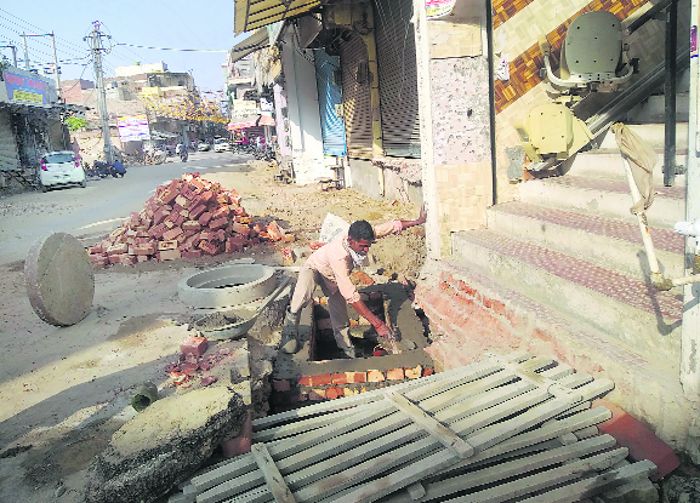 The work of laying sewerage pipes on Peeli Sadak underway in Patiala on Sunday. Rajesh Sachar

The ongoing civil works in Patiala city have become a matter of inconvenience for residents. While the work on the heritage street has been going on for over five months, residents have been complaining of prolonged delay in the laying of sewerage pipes and other works.

The Peeli Sadak in Ragho Majra is one of the roads where market associations and residents complain of various problems.

The Municipal Corporation is carrying out the work of laying sewerage lines in various parts of the city. Residents said the MC officials assured them that the work would be completed in 15 days, but the work still stands pending even after two months.

A shopkeeper adjacent to the Hanuman temple in the city said: “Shops in the area are facing huge losses due to the delay in work. Two works — one of the heritage street and the other of laying sewerage pipes — are going on at the same spot in our area. This has left the shopkeepers out of work while the constant digging and ongoing work has left people coughing due to sand.”

A garment shop owner on Peeli Sadak said: “The civil work of laying sewerage pipes is going on for the past two months. Initially, they said it would be completed in 15 days.” He said a few days ago, a child fell into a pit dug out for laying a sewerage pipe. “A number of officials reached the site to oversee the work. Now also, the road work is pending and will take a long time to complete. Our business has already been affected.”

Roshan Lal, a resident near a private school adjacent to Ragho Majra, said: “The MC had started the work of laying sewerage pipes in our area over two months ago. The work is nearing completion, but they have not yet lifted the debris. Excessive dirt gathers in the whole area due to pending works.”

On the ongoing work of sewerage pipes, Corporation Commissioner Poonamdeep Kaur said: “The inner city works are quite intricate as the streets are small. People have also taken illegal connections.”

On the alleged delay in work, she said the corporation has made a work chart. “We have completed 53 works out of the total in the past one and a half months. The pending works will be completed in a month or so. Obviously, residents face issues, but we are trying to complete the work properly at the earliest.”