To conduct strict audit of oxygen usage to stop its wastage 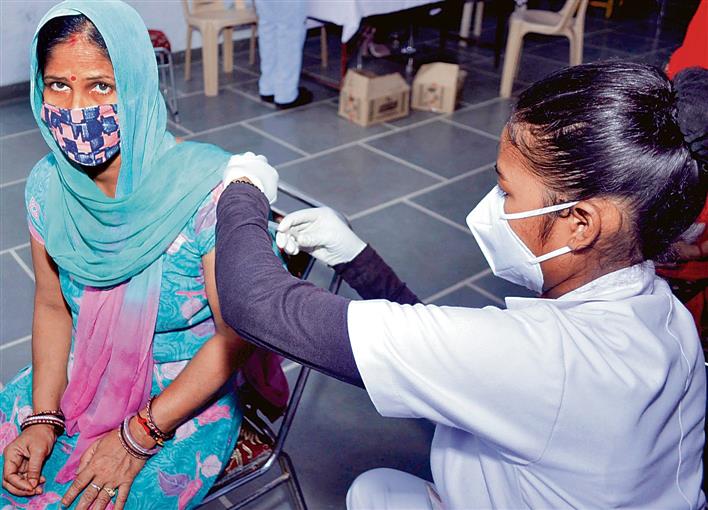 A beneficiary receives the Covid vaccine at a centre in Patiala on Wednesday. photo: Rajesh Sachar

“The district level task force will monitor overall arrangements and activities during the Covid pandemic while the paediatric task force will ensure preparations to deal with coronavirus cases among children. It will take immediate action when such cases come to the fore. The paediatric expert group comprising senior doctors will provide technical inputs about the line of treatment for Covid-affected children. The group will also assist and guide the district level task force,” said Kumar Amit, Deputy Commissioner (DC), Patiala.

“The pediatric expert group will have two doctors, who will be nominated by the Civil Surgeon and Medical Superintendent of the Government Rajindra Hospital,” the DC added.

Stressing on the need for enhancing existing L-2 and L-3 bed capacity for the third wave, the DC said special attention would be given to children. He asked health officials to keep the medical infrastructure well prepared keeping in view paediatric needs. He directed the paediatric expert committee to visit government and private hospitals of the district for mapping the required infrastructure.

Setting up a 15 days window for training and other preparations for doctors, ANMs and Anganwadi workers, the DC said that they would complete all the basics by the time state framed SOPs. Opening of educational institutions in the coming days might be a big challenge, the DC added while addressing the DEO, DPO and DSSO.

Henceforth, as soon as protocols of treatment line from the state authority were received they would arrange the stock of requisite drugs, said the DC while invoking shortage of certain medicines during the second wave.

The DC directed officials to keep a strict vigil on demand of medical oxygen. Strict audit of oxygen use would be conducted to stop its wastage, the DC added. Private hospitals would also be alerted about strict compliance of capping while treating Covid patients, said the DC.