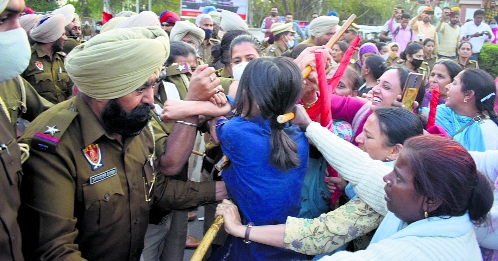 The police canecharged members of the Punjab and UT Mulazam Sangharsh Morcha, including women, near the Chief Minister’s residence today evening.

Many union leaders were also detained by the police. After holding a sit-in outside the PSPCL office, the protesters tried to march toward the CM’s residence. However, they were stopped by cops deployed at YPS Chowk.

After a minor scuffle broke out between the police and the protesters and the police resorted to lathicharge. Over a dozen protesters received injuries. One of the union members also reportedly suffered a fracture on his hand.

Davinder Punia, convener, Punjab and UT Mulazam Sangarsh Morcha, said, “Lathicharge on women is government’s gift to them on International Women’s Day. The government has backtracked almost on all their pre-poll promises.”

Another protester, Hardeep Toderpur, said, “Instead of provideing jobs to youth, the government is trying to abolish already existing posts in various departments, including the Department of Education.”

Later, detained protesters were released by the police in the evening.