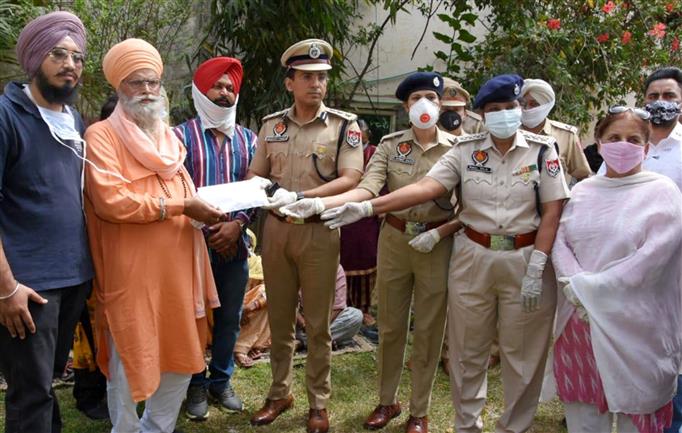 Police officials with the founder of an old-age home in Patiala on Tuesday. Tribune photo

The Patiala police have come up with an innovative project, Navjeevan, to rescue the destitute and homeless people with the active support of local NGOs.

While inaugurating the project at the All-India Pingla Ashram, SSP Vikram Jeet Duggal said: “The goal will be to reunite the destitute with their families and the loved ones.”

“Apart from saving innocent lives, Navjeevan aims at accomplishing a number of goals, including preventing human and organ trafficking, reducing crime and improving the urban environment of the district in general and Patiala city in particular,” said Duggal.

The SSP appealed to people, especially the youth, to come forward and take ownership of the project to make it a huge success by saving more and more lives.

During the first day of the launch, a team of Umeed volunteers and policemen rescued eight destitute persons — one male and seven females

While giving credit to the team, Duggal disclosed that Dr Simrat Kaur, SP Headquarters, and Manpreet Kaur, SHO, Women Police Station, had been on the forefront to execute the strategy for the rescue operations under the aegis of Navjeevan.

Duggal thanked Baba Balbir Singh, founder of the old-age home and Pingal Ashram, Sanour Road, Patiala, and other volunteers for their contribution towards rehabilitating the needy. He thanked eminent citizens, including doctors, psychologists and lawyers, who are working with the Umeed support centre.

Baba Balbir Singh, founder of the old-age care centre, said: “This is the first time a senior police official has visited the ashram, which is a matter of pride for us. We hope that with the help of the Police, we will try to carry out the noble cause more smoothly.”