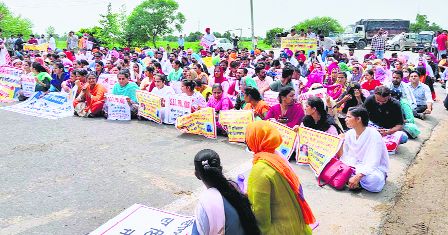 The protesting teachers staged a sit-in and raised slogans against the Punjab Government for “failing to provide jobs to the qualified youngsters”.

The protesting teachers demanded that they would not end their protest until a meeting with Chief Minister Captain Amarinder Singh was fixed by the administration.

The protesters said the ‘Ghar Ghar Rozegar’ scheme had turned out to be a “sham and a mere poll plank”.

“The harsh reality is that the unemployed youngsters have either been moving abroad or they are protesting on roads for jobs,” they said.

Sukwinder Dhilwan, president, BEd-TET Pass Unemployed Union, said they were protesting for the past nine months, but the government had continuously been ignoring their demands.

“Captain Amarinder Singh, before coming to power, had promised to provide jobs. Now, it seems that it was just an election gimmick because qualified youngsters without jobs are on roads,” he said.

Dhilwan also informed that one of the protesters – Manish Fazilka – had been protesting atop a water tank at the Sangrur Civil Hospital.

Later in the evening, the protesters lifted the dharna after a written assurance of a meeting with Education Minister Vijay Inder Singla and Sandeep Sandhu – OSD to Chief Minister Captain Amarinder Singh.

Meanwhile, commuters were at the receiving end due to the road blockade by the protesting teachers.