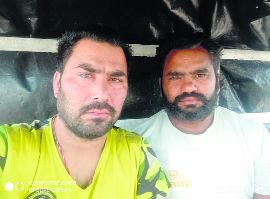 Teachers Harjeet Singh and Surinderpal Singh. The duo has been staying atop a mobile tower since March 21 to press for their demands. File

The protesting ETT/TET pass unemployed teachers today hit out at the Congress dispensation in Punjab, saying instead of giving freebies, Captain Amarinder Singh-led government should provide jobs to the unemployed.

The two teachers, who have been staying atop a mobile tower since March 21, to press for their demands, also lamented the “insensitive” approach of the government.

Even after 15 days, they (government) remain adamant. They are not paying any heed to our genuine demands, Harjeet Singh and Surinderpal Singh said in a latest video message.

The two are demanding that the Education Department should repeal the provision for BEd entry into the ETT and advertise 10,000 new posts of their cadre immediately.

The Patiala police have already booked the duo.

This government has become insensitive. No one from the district administration has so far approached us for talks, they said.

“Our health is deteriorating with each passing day. The government should immediately fulfil our demands,” said Harjeet Singh.

“The Congress dispensation has not been able to provide jobs to the qualified teachers for the last four years. Instead of giving freebies, such as free travel for women, the government should give jobs to the unemployed so that they can pay for their tickets,” added Surinderpal Singh. — TNS