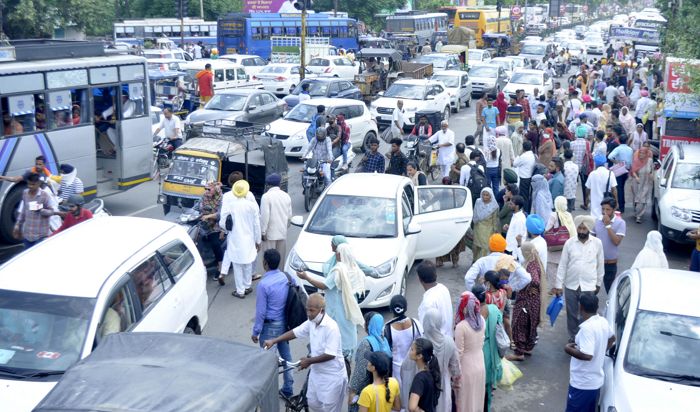 Passengers wait for private buses and taxis outside the bus stand in Patiala. Rajesh Sachar

As such commuters in personal vehicles, along with those travelling by public transport, were harassed due to the chaos. Traffic in the Tripuri area was also affected due to ongoing construction of the Heritage Street.

Due to the ongoing protest by employees of the PRTC, those commuting by public transport buses were left stranded throughout the day. While government run buses remained off the road due to the strike, entry and exit of private buses to the bus stand was also stopped by protesters. They locked the bus stand in the morning hours.

Some private buses were seen carrying passengers more than double their capacity on rooftops. People clung to doors and windows of private buses to reach their destination. The road from the city bus stand towards Urban Estate witnessed excessive traffic jam as buses were parked on the stretch.

The protest by contractual workers of government offices at Sewa Singh Thikriwala Chowk, near Sangrur Road, also hampered movement of vehicles. People commuting in private vehicles and buses plying on the road were forced to take alternative routes, which affected internal traffic in the city.

Youngsters, who have been protesting on Passey Road since Tuesday, blocked internal roads of the adjacent colony here today. Thirteen protesters, including four girls, have been sitting on hunger strike, some atop an overhead water tank since Tuesday morning.

Jagdeep Singh, one of the candidates selected by the Punjab Police, said, “Our protest will continue till we are not given joining letters. They want us to lift the protest for a meeting, but we remain steadfast on our approach.”

Officials said other vehicles were diverted from Badi Nadi Road to the northern bypass and connected to Urban Estate Chowk. Vehicles could also take Chaura village road towards Bahadurgarh or towards Commando complex.

Daljit Singh, a traffic police official, said, “Apart from the traffic advisory, the Police Department has also deputed traffic marshals at various roundabouts for the smooth flow of traffic.”

Shopkeepers in the city today expressed concern over losses in business due to ongoing protests. They said many organisations were protesting in the city against the state government for their demands, which caused losses in their business.

Continuous protests at Thikriwala Chowk and other places in the city had affected customer footfall as few residents visited their shops, shopkeepers added. They would also have to stage a protest if their businesses continued suffer, said shopkeepers.