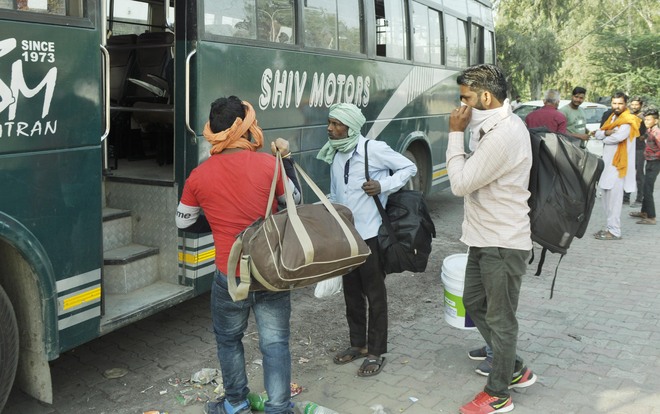 Amid rising number of Covid cases in rural Punjab, the return of migrant labourers has added to the concerns of the government.

Amid rising number of Covid cases in rural Punjab, the return of migrant labourers has added to the concerns of the government. While farmers are eager to welcome the migrant paddy labour, experts warn of testing and vaccination.

Twenty-five villages in the state have already been declared containment or micro-containment zones.

The health department claims that regular check-up camps and tests would be conducted to keep tabs on labourers returning from Bihar and Uttar Pradesh, but only if reported.

Experts suggest that any laxity on part of the farmers could be a threat to villagers. “Testing is the key and minimum 10-day isolation should be mandatory for those entering villages,” they say.

Migrants have started contacting farmers and have reportedly assured them of returning to Punjab before the paddy season begins. “They are urging me to ensure their ration and stay even if lockdown is extended after the paddy season is over. They have also asked me to arrange for their safe return if crisis deepens,” said Jasdeep Singh Garcha, who own over 40 acres in Punjab and 20 acres in Uttar Pradesh.

Bade Lal, a paddy labour contractor, said: “For the past three generations, my family has been involved in arranging labourers for paddy transplantation. While lakhs of migrants returned to their villages amid lockdown, I have arranged nearly 150 workers from my village in UP. They will be brought in buses next week.” When asked if they will carry Covid-negative reports, he said he did not want to put such conditions, otherwise the labourers would get scared. “Let them reach and we will see,” he said.

What worries health officials is that majority of the labourers entering Punjab have refused vaccination in their native state and are even entering Punjab without getting themselves tested. “The only fear is that thousands of these migrants will enter Punjab, as they do every season, but will not be isolating themselves. They won’t even be carrying mandatory Covid-negative report,” said a top health official.