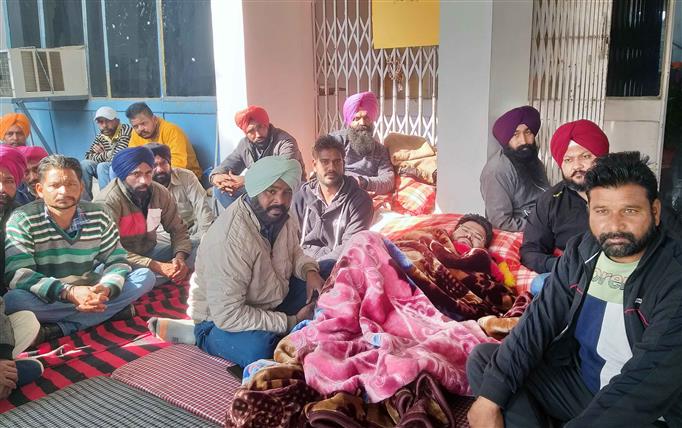 Over 3,000 Class B and C employees have not received their salaries for past two months. Rajesh Sachar

Non-teaching employees of Punjabi University today started a protest outside the vice-chancellor’s office. According to the protestors, over 3,000 Class B and C employees have not received their salaries for the past two months.

The employees are under acute mental stress due to the administration’s failure to pay salaries. The first week of December has already gone by, but we have not received our salaries for the past two months. Gurjeet Singh Gopalpuri, a non-teaching employee

“No one wants to protest against the university, but we have been forced to do so. The administration’s failure to release our salaries for the months of October and November has forcefully brought us here,” a protester said.

Gurjeet Singh Gopalpuri, a non-teaching employee, who has been holding a hunger strike outside the VC office since Monday said, “The employees are under acute mental stress due to the administration’s failure to pay salaries. The first week of December has already gone by, but as many as 3,000 B and C category workers have not received their salaries for the months of October and November. The university has not even paid the salaries to Class A teaching and non-teaching staff.”

One of the employees said, “Due to the non-receipt of salaries on time, many of us have been unable to pay for our daily expenses and are under constant stress. Some of us have sought loans from banks and are being penalised for late payments.”

Another employee explaining her ordeal said her son is a student of a Master of Arts program. “The university has failed to disburse salaries for the last two months, but the authorities want that we deposit his fees on time. I will not be able to pay the fees without getting my salary.”

The workers also want the university to implement the Sixth Pay Commission scales for the employees.

An employee said, “The university passed the new pay scales during a meeting of the Syndicate in March, but has failed to implement them. The hike in our salaries stands implemented from July 2021. So, the university will have to pay us the arrears as well. But the administration has failed to even release the current salaries.”