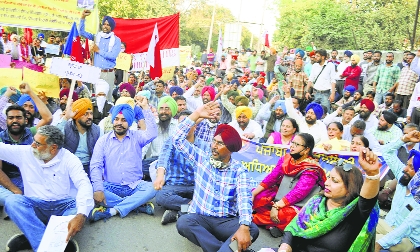 The city today witnessed protests by Punjabi University teaching and non-teaching staff, students and pensioners. Students blocked traffic on the Patiala-Chandigarh highway for over an hour during a demonstration in the afternoon while the teachers association PUTA led a protest march towards the CM residence in the evening.

Classes and administrative work at the university were yet again affected as students blocked university main gates during demonstration. Led by Punjab Radical Student Union (PRSU), they raised slogans against the state government and the university administration over deteriorating fiscal health of the institution and held a sit-in at the Phase 3 light point. As a result, traffic on the national highway came to complete halt for over an hour. The protesters were joined by women farmers from the area.

During sit-in, students demanded financial grants for the university from the state government.

The Punjabi University Teachers’ Association (PUTA) along with non-teaching employees and students held a protest march in the city. The protesters walked from Omaxe Mall toward the YPS Chowk, near the CM residence.

The PUTA president, Dr Nishan Singh Deol, said, “Employees are protesting as the university administration has not paid salaries to them for a long time. The university is facing financial slump. We have been protesting on the campus for over 150 days. The present situation has raised questions over the existence of the university while there are apprehensions of its privatisation.”

Talking about the meeting held with the Governor today, Dr Deol said, “We submitted our representation at his office. He was not aware of the university’s condition.”

“Acting Vice-Chancellor Ravneet Kaur has not once visited the university in the last two months. The VC should resign from the post if she is not interested in managing its affairs. The gap has left the university matters unresolved,” Dr Deol added.