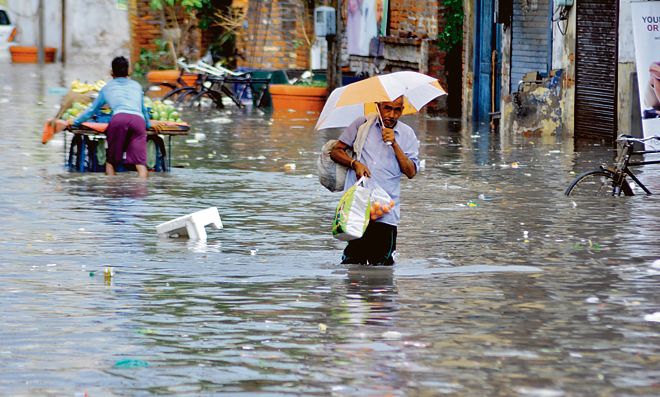 A resident wades through a waterlogged road after the rain in Patiala on Tuesday. Tribune photo: Rajesh Sachar

Lucky, a resident of Tripuri area, who delivers food tiffins, said: “We had to wade through knee-deep rainwater to reach out destinations. I could not reach a few areas as the water level was so high.”

Natwar, a resident of Ferozepur, who runs a business in the city, said: “Water entered shops and houses.”

Harmeet Singh, who was standing in the Chandni Chowk area, said: “It has been three hours since the rain stopped but roads are still waterlogged. Cars parked on the road have been submerged. Shops are lying closed as traders have failed to reach their establishments.”

A local politician associated with an Opposition party visited houses in the Kadah Wala Chowk area. He raised questions over the dismal condition of the city drainage.

The Punjabi University campus, areas near the university and Kauli village also witnessed acute waterlogging. Many cars were seen stuck on roads at Vidya Nagar. Similar was the situation near the Kali Mata temple.

Officials in the corporation have blamed the delay in the completion of nullah cleaning for waterlogging.

City Mayor Sanjeev Kumar Sharma blamed the haphazard development of colonies in and around the city for waterlogging. “Haphazard development and regularisation of illegal colonies sans proper facilities is to blame for today’s situation. Also, the city does not have a storm-water drainage due to which we have to clear rainwater through the nullah and the sewerage system. However, we are ensuring that water does not remain stagnant for long. We will also shift the dairies, which produce huge amounts of waste and dump it in the sewerage, out of the city by September-end to ease the situation,” he said.