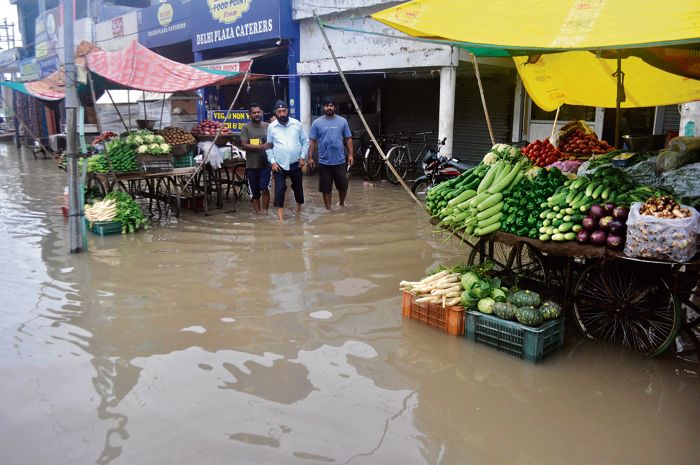 Rain that lashed the city in the morning hours and continued till the afternoon left most streets and roads waterlogged. Rainwater entered many houses, government as well as private establishments.

The situation has yet again raised questions over development works being carried out in the city, including the laying of paver blocks.

Rainwater entered the premises of the hostel at the Thapar Institute of Engineering and Technology, Community Health Centre, Model Town, and other places where officials were seen removing water with buckets.

The heavy rain started around 9 and and light rain continued till 1 pm.

The situation has also raised questions over the poor drainage of the city which the corporation officials repeatedly defend as properly managed.

Amarjit Singh, who runs an eatery at Tripuri, said: “Rainwater enters houses, shops and disrupts life in our area every time it rains. Officials of the Municipal Corporation and the administration should find a solution to this problem.”

A resident of Sirhindi Bazaar, who works at a shop at Anardana Chowk, said: “Water accumulates on roads every time it rains. Various works underway in the city, including installation of interlocking tiles, should be reviewed.”

Congress leader and councillor of ward no. 44 Krishan Chand also blamed interlocking tiles for the situation. “A haphazard installation of interlocking tiles has led to flooding of streets and roads. The road work at various places has been affected due to stagnant rainwater. The contractors have not carried out the works properly.”

Municipal Corporation Commissioner Poonamdeep Kaur said: “We have carried out a survey of the city half an hour after the rain and it was observed that water in most areas has receded. I will get the situation checked in other areas wherever residents are facing problems.” She added the Municipal Corporation had instructed teams of workers to be present at all identified spots and act swiftly to ensure rainwater receded at the earliest. “Cleaning of the city’s main nullah is underway. Apart from that, teams are working in the Books Market area, B Tank Road, to remove water at the earliest,” she said.