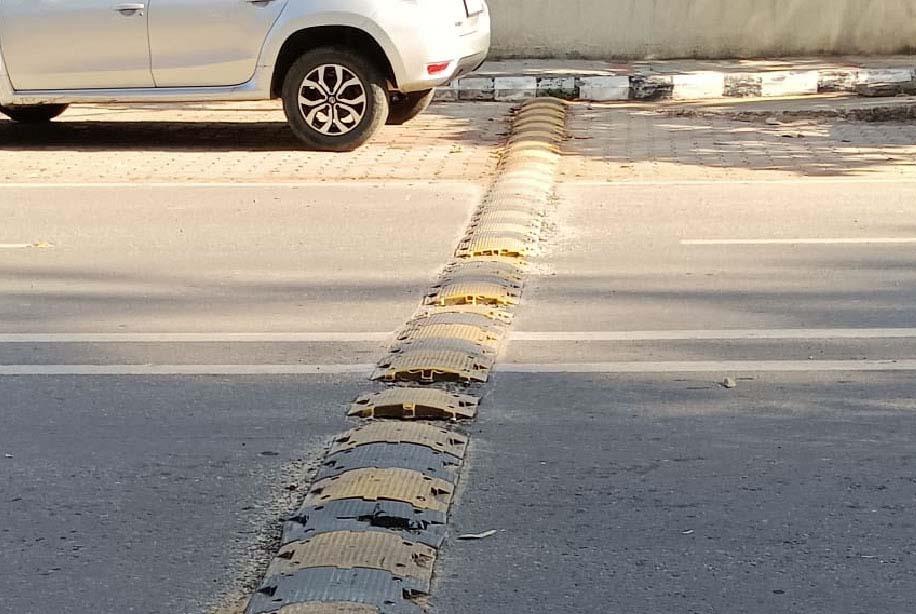 Residents in the city have questioned the need for plastic speed humps fitted with nails on main and internal roads of the city.

Residents in the city have questioned the need for plastic speed humps fitted with nails on main and internal roads of the city. Alleging that these speed humps have become a threat to life and property of commuters, RTI activists have complained to the Municipal Corporation (MC) and the Public Works Department (PWD).

Most of these speed humps are constructed in an unscientific manner and do not conform to the Indian Roads Congress (IRC) standards. These are leading to fatalities, mishaps and damage to vehicles.

In his complaint, RTI activist Davinderpal Singh has said unscientific plastic speed humps in yellow and black colour pose a big danger to motorists, especially two-wheeler riders. “Most of these speed humps are constructed in an unscientific manner and do not conform to the Indian Roads Congress (IRC) standards. These are leading to fatalities, mishaps and damage to vehicles.”

Speaking with The Tribune, Davinderpal Singh said such speed humps had been installed on internal as well as external roads of the city. “These cause harm to the driver and the vehicle and are in violation of IRC rules. Also, their life is only four or five months, after which, the four-inch-long iron screws pose a threat to the vehicles. In actual, the speed humps should be made while carpeting the roads or installing interlocking tiles. The speed humps should form a hump of 3.7-metre width and 0.10-meter height with a preferred advisory speed of 25 kmph for general traffic. The specifications have been mentioned in the IRC rules and these should be followed.”

Meanwhile, Corporation Commissioner Poonamdeep Kaur said the MC could ensure that rules were followed for internal roads in its ambit. “The main roads are constructed by the PWD. We do not have anything to do with them.”

The PWD XEN, Sohan Lal Garg, said the rules of IRC would be looked into. “We will take steps as per law. If the speed humps are found faulty, they will be removed.”