Dumping of sewage & animal carcasses into rivers has aggravated issues 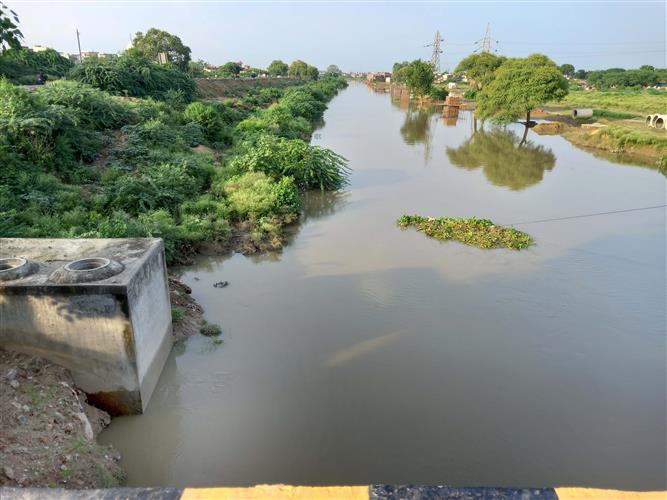 Every year, people fear flooding of nearby colonies due to rise in Badi Nadi water level. Rajesh Sachar

Receding water level in Chhoti and Badi Nadi has brought much-needed respite to hundreds of residents of colonies adjoining the two rivers. Still, people continue to live in fear of the situation getting worse.

Flowing of untreated sewage, dumping of animal carcasses and other waste into both rivers have caused unprecedented problems for residents. Irrigation officials say these issues would be tackled through the beautification project.

Residents living adjacent to Chhoti and Badi Nadi said they remain vigilant every year due to unprecedented rise in water levels of the two rivers.

Dimple Kumar, whose elder brother lives in the low-lying Gopal Colony, said they were dependent on the district administration to prevent overflow of water from Badi Nadi. “We fear the rise of water level in Badi Nadi and flooding of our colonies every year, but can’t do much about it. The administration should ensure that there is no wild growth and dumping of waste in both rivers.”

Sooraj, another resident of the colony said, “We fear water level will rise in both rivers every rainy season. The cleanliness work being carried out in Badi Nadi is slow. The administration should ensure that Badi Nadi is cleaned regularly.”

Meanwhile, officials of the Irrigation Department said wild growth had be removed from the rainwater tributaries. They said the wild growth, which was one of the many reasons for overflowing of Badi Nadi in 2019, was cleared thereafter.

The Irrigation Department, along with the Municipal Corporation, has till date, failed to plug unregulated discharge of sewage from adjoining colonies into both rivers.

The XEN, Irrigation Department, Ramandeep Singh Bains, said, “The solution to all problems is the joint beautification and cleaning project being carried out along with the PDA and the sewerage board.”

He said, “Badi Nadi is clear of wild growth. We are plugging unregulated discharge of sewage from adjoining colonies into the two rivers as part of the project. Also, once the project is completed, fencing will be installed along both rivers to prevent dumping of waste and carcasses into them.”