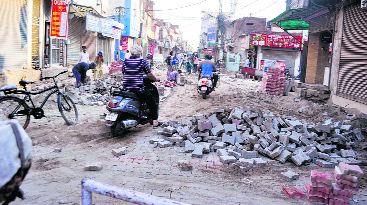 Many roads in the city are under construction forcing residents to take long detours to reach their destinations. The monsoons season is around the corner but road works are still going on.

These works have been started only recently in some areas and are set to continue throughout the rainy season.

The work of installation of interlocking tiles is going at Chandni Chowk, Peeli Sadak and at Ragho Majra in the city. The Heritage Street work has been going on for a long time near the Hanuman Mandir.

Meanwhile, a number of roads are under construction near the Bartan Bazaar chowk, government school at Anardana Chowk and near the office of languages department. Work is also going on near the Government Rajindra Hospital.

A shopkeeper of Anardana Chowk, Sukhminder, said: "Roads in the whole city are being constructed. They start work on a road and soon move to another stretch without completing the earlier one."

A commuter in a four-wheeler who was trying to reach the Lower Mall Road area from the internal city at Peeli Sadak, claimed: “We had to turn around from three points already.”

Joint Commissioner Avikesh Gupta said: “Work is going on at a high speed. The laying of sewerage pipes is going on only for the benefit of local residents as the roads are being widened.” He said the residents wanted the work in their areas to be started along with others. “But we will direct the engineering team to identify the spots prone to waterlogging and take requisite steps.”