Had looted shop owner of Rs25K at gunpoint 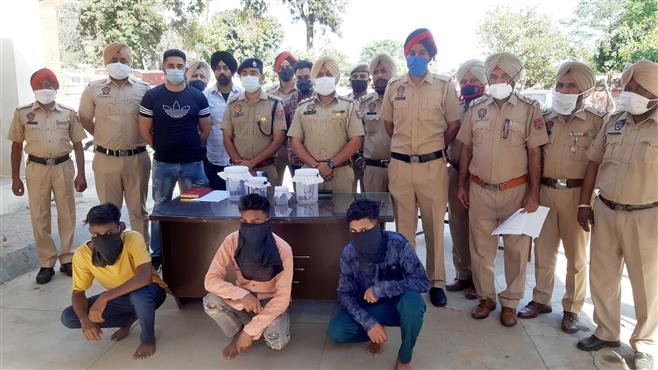 The suspects in police custody in Patiala. Tribune photoo

Four days after three armed men barged into a paint store on the busy Sirhind road and robbed its owner of Rs25,000 at gunpoint, the police claimed to have arrested the trio.

The police said all three are in their mid-twenties. The suspects have been identified as Sunny, Ashwini Kumar and Roshan Mandal from Sukhram Colony. The police have seized the weapon and the money from their possession.

According to City DSP Saurabh Jindal, the three suspects entered Barnala Paint Store on April 20 and one of them tried to shoot its owner, but misfired. “According to the video footage obtained from a CCTV camera installed at the shop, the robbers threatened the shop owner and one of them took away Rs25,000 from the cash counter,” said the police.

The three are daily wagers and planned the crime to extract easy money. “We are trying to find if they were involved in similar crimes earlier as well,” said Jindal.