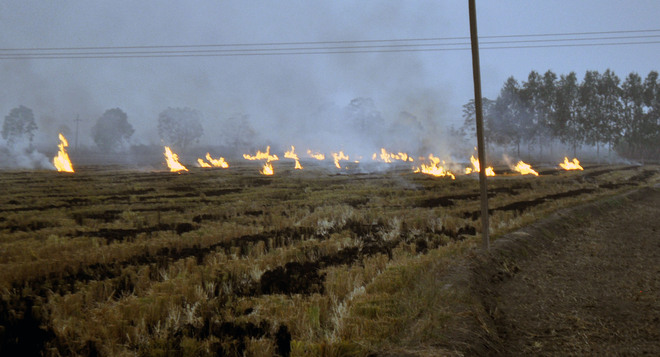 The Punjab Government is looking to incentivise industry, including distilleries and breweries, in a bid to tackle the menace of paddy stubble and farm fires.

With farm fires expected to start this week, the government is trying to promote stubble use with cumulative fiscal incentives of Rs 25 crore to certain industries, in addition to deputing over 8,000 officials in the field — starting Wednesday.

Officials privy to the development confirmed industries such as sugar mills, pulp and paper mills, besides those having boilers with steam generation capacity of more than 25 tonnes per hour will be eligible for the incentives.

Senior Punjab Pollution Control Board (PPCB) officials said the government had decided to provide cumulative fiscal incentives of Rs 25 crore to the first 50 existing industries on a first-come-first-served basis.

“New and existing distillery and brewery units, proposing replacement of old boilers or expansion with installation of new boilers, are required to use paddy straw as fuel. Further, we will allow non-fiscal incentives to such industry in terms of availability of ‘panchayat’ land for storage of paddy straw with 33-year lease agreement,” said officials.

Sources say the government plans to ensure they manage to cut farm fire incidents by half this season by using various means. “Punjab wants to add to the farm income by diverting additional farm stubble to such units due to rising cases of farm fires,” said a source.

“We welcome the move and it’s a positive step and but its success will depend highly on the farmer getting a suitable price for the stubble,” said Satnam Singh Behru, president, Consortium of Indian Farmers’ Associations.

“To curb the menace of paddy straw burning adding to poor air quality, the state government is working to present ‘paddy straw’ as a resource that creates value and wealth for industry and the farming community,” said a top official.

Meanwhile, starting Wednesday, over 8,000 village-level nodal officers appointed for the current paddy season will monitor farm fires round the clock using a mobile app. In addition, over 76,626 advanced machinery will be available in the state.

However, experts suggest this year, stubble burning can start as early as mid-September, given early sowing in parts of the state, and these are not good signs amid the Covid pandemic, which affects patients with weak lungs.

The state Agriculture Department is banking on 76,000 machines, which will take care of the 20 lakh hectares of agricultural fields with stubble. “This year, we expect 40 per cent less cases of stubble. However, ensuring cooperation from farm unions is crucial,” said a senior agriculture official.

“With elections round the corner, soft approach towards punishing erring farmers could be a deterrent to ensuring ‘no farm fire policy’,” added the official.

According to the Central Pollution Control Board, stubble burning contributes significantly to air pollution in Delhi and NCR every post-paddy season.

The government is working to present paddy straw as a resource that creates value and wealth for industry and farming community. — A govt official