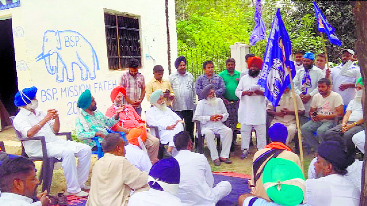 Member of the SAD and the BSP at a meeting in Patiala on Saturday. Tribune photo

After the announcement of alliance between Shiromani Akali Dal (SAD) and Bahujan Samaj Party (BSP) for the upcoming Assembly elections, Sukhwinder Minta, a member of the SAD political affairs committee, said political equations in the state had completely changed.

The alliance would ensure that the SAD-BSP would form the next government in the state, he added. It was a historical alliance after a gap of 25 years, he added.

“We have already started working together and held a meeting to plan the future course of action. The alliance will bring new changes in the state, which will save people from the Congress, which is looting them,” he said.