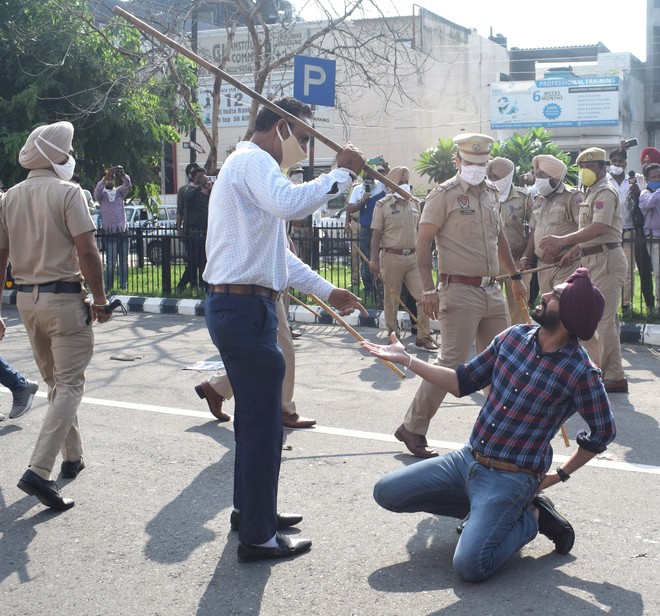 A cop uses force on an LIP leader in Patiala on Monday. Rajesh Sachar

The Patiala police have registered an FIR against Simarjit Singh Bains, Balwinder Singh Bains and 300 members of the Lok Insaaf Party (LIP) for interference in the duty of police officials and violation of guidelines regarding Covid-19 during their protest in Patiala.

The protesters jostled with the police party which then resorted to a lathicharge to disperse the crowd. Officials said four police officials, including a sub-inspector and two women constables, were injured in the incident and were later admitted to a hospital.

Leaders and activists of the party had gathered in Patiala and demanded dismissal of Cabinet Minister Sadhu Singh Dharamsot over allegations of his involvement in the post-matric scholarship scam.

They gathered in the city and organised a march towards the Chief Minister’s residence carrying posters when they were stopped near the polo ground.

Administrative officials said Sub-Divisional Magistrate (SDM) Charanjit Singh asked them to maintain order in view of promulgation of Section 144 of the CrPC, but they jostled with the police. The police then resorted to a lathicharge.