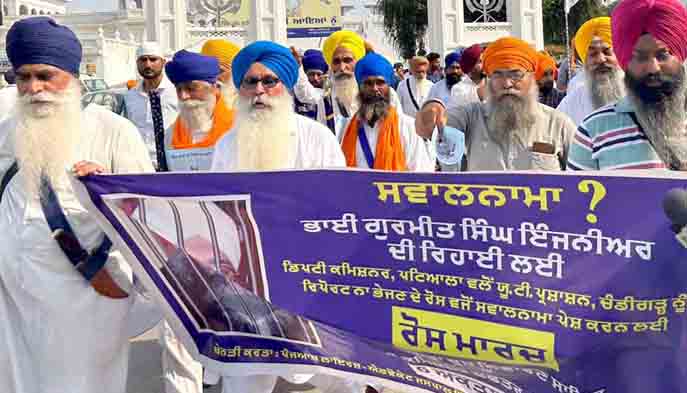 Sikh bodies joined by members of the Shiromani Gurdwara Parbandhak Committee (SGPC) today held a march from Gurdwara Dukhniwaran Sahib to the office of Deputy Commissioner, Patiala seeking release of Sikh political prisoner Gurmeet Singh Engineer and others languishing in different jails in the country.

They said the district administration had failed to send a report sought by the office of UT Home Secretary regarding his release despite 14 reminders.

The Sikh leaders questioned the district administration’s failure to send a report sought by the UT administration over the release of Gurmeet Singh, jailed in connection with former CM Beant Singh’s assassination. They said they wanted the government to release all Sikh political prisoners languishing in different jails in the country, but “the government is creating legal hiccups”.

They said they held a protest march demanding release of all Sikh political prisoners. The mother of Gurmeet Singh was also part of the march.

SGPC member Satwinder Singh Tohra said Gurmeet Singh Engineer had filed a petition in the Punjab and Haryana High Court demanding release after completion of his jail term in 2021.