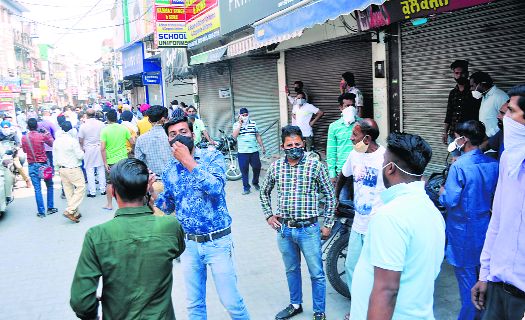 Traders and members of the Punjab Beopar Mandal try to open their shops in a market near Anardana Chowk in Patiala on Thursday. Tribune photo

After various shopkeepers protested in the city yesterday, the police registered a case against seven identified and other 30 to 35 unidentified persons for violating orders of the District Magistrate (DM) and under the Disaster Management Act.

The police have also strengthened security in the market areas to check violation of the DM’s orders after shopkeepers yesterday announced that they would open all kinds of shops. Many shops dealing in handloom, household essentials and others items opened today.

There was utter chaos on roads in city markets in the morning today. Many shops opened on a call given by the Punjab Pradesh Beopar Mandal violating DM’s orders while others remained shut. Shopkeepers remained present in markets, which created rush, in the morning hours as police officials went around instructing people not to violate DM’s orders.

While talking to the mediapersons, the beopar mandal president, Rakesh Gupta, said they would open all shops. Responding to the matter of registration of an FIR against him and others, Gupta said they were firm on their decision to open shops.

Meanwhile, city residents raised questions over the state government’s concession given to various businesses while enforcing curbs on others.

“Earlier, the government permitted chemists, shops selling milk and dairy products to open on May 2. Then they allowed shops selling agriculture items, grocery and liquor to open. Traders selling industrial material were also allowed to open their shops two days after. In latest orders the administration has allowed businesses related to fisheries, meat products and import export. This has become a joke now,” they added.

Another cloth shop owner at the AC market said, “Only mechanics, cloth shop owners, bakeries and vehicle dealers have been left out. The rush of vehicles is usual in the city. The administration should find an alternative way of dealing with the pandemic.”

Officials in the administration said, “The Police Department has been issuing challans to those found violating the norms. We will make provisions for opening of shops as per requirement.”