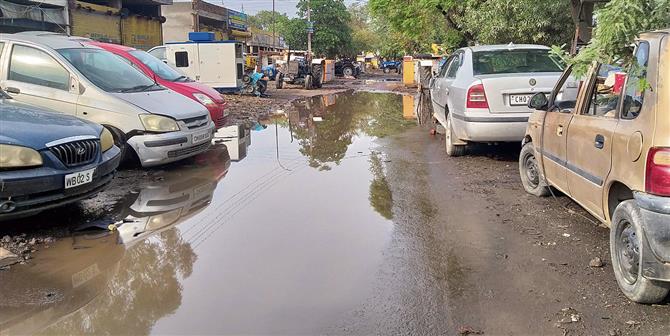 Water has accumulated in various areas of the city after it rained yesterday. Residents are worried about the spread of mosquito-borne diseases in the city.

Rainwater has accumulated on open government land outside SST Nagar, in Tractor Market on the Rajpura road, many places in the inner walled city, plots and other locations in the city. Officials in the Municipal Corporation (MC) said they had issued directions for spraying larvicide in the city.

Simran, a shopowner at Tractor Market said, “Water accumulates in the market every year after it rains. This area falls under the Improvement Trust. Besides, there are many other problems in the market, which shopkeepers are facing.” Roads in the area were re-carpeted, but these broke again, he added.

Residents of SST Nagar also complained of waterlogging on various roads. Swati, a student and area resident said, “Water gets accumulated in a street near Guru Harkrishan Public School. Similarly, there are other spots where there is waterlogging whenever it rains.”

Meanwhile, vacant government land outside the SST Nagar area on Rajpura Road has turned into a pond. Hari, who sells corn on the adjacent road said, “Now mosquitoes will start breeding here. Everyone living nearby will fall sick either due to dengue or malaria.”

Meanwhile, officials of the MC today said they were trying solve the waterlogging issue in the city. “Member Parliament Preneet Kaur visited many areas of the city and directed officials to drain rainwater at the earliest,” an MC official said.

Joint Commissioner Lal Vishwas said, “We have assessed rainwater accumulation in all parts of the city. Officials have also visited many locations. We are working on making provisions for draining rainwater.”

“The MC has directed its staff to spray larvicide at all spots where rainwater has accumulated,” he added.