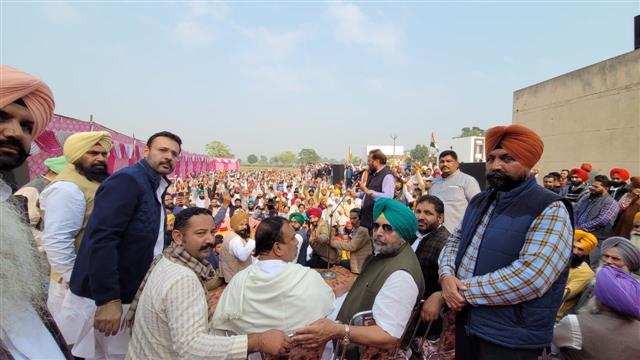 Congress leader and Sanaur halka in-charge Harinder Pal Singh Harry Mann said today that a veteran Congress leader from the area had conspired with the Shiromani Akali Dal (SAD) to defeat him in 2017 Assembly elections from Sanaur.

Mann strongly made his claims of fighting the upcoming Assembly elections from Sanaur on the Congress ticket. Mann has already opened his election office in Sanaur.

Mann, while addressing a large gathering in the presence of All India Congress Committee (AICC) secretary and co-incharge, Punjab, Harshwardhan Sapkal, and Congress observer Sanjay Thakur, claimed that the veteran party leader helped SAD leader Prem Singh ‘s son Harinder Pal merely to secure help from SAD to get his son win elections from other constituency in Patiala.

Mann said after losing in 2017, he had been working for the people of Sanaur. “I used to visit my daughter, who is in the USA, every year. However, since I fought elections I never went to meet her so as to make my availability to the people of Sanaur,” he said.

Meanwhile, Mansimrat Singh Sherry Riar, accompanied by the party supporters from Sanaur, met secretary of All-India Congress Committee and Punjab co-in-charge Harshwardhan for party ticket from the area. The meeting was held at the Circuit House in the city.

Riar said a meeting was held with Harshwardhan on various issues, including political scenario in the Sanaur area. “The party has made it clear that ticket will be distributed on merit. The party will give prominence to youth candidates in the elections,” Riar said.