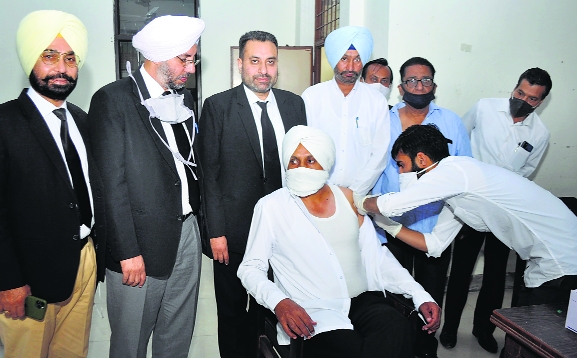 An advocate being inoculated during a special vaccination camp at the District Courts Complex in Patiala on Friday. Tribune photo: Rajesh Sachar

In the highest single-day spike since the Covid outbreak, Patiala today reported 313 positive cases. This has raised an alarm for the Health Department and citizens.

Earlier, the highest single-day cases (298) had been reported in September last year. The number of active cases in the district now stands at 2,638. Besides, the district reported six Covid deaths in the past 24 hours taking the toll to 598.

Of 313 positive cases, only 56 were the contacts of positive patients and 257 were reported from hospital OPDs afresh.

Patiala Civil Surgeon Dr Satinder Singh said Patiala city had reported 149 cases, while Rajpura reported 66, 20 were from Kallon Majra, 20 from Kauli, 19 from Nabha and 10 from Shutrana. Besides, nine positive cases were from Dudhan Sadhan.

According to the Health Department, March has been the worst month for Patiala on the Covid front. As many as 5,272 persons had tested positive in March.

Patiala Civil Surgeon Dr Satinder Singh said: “The cases are expected to rise in the coming few days because the virus has mutated and became more infectious. In the wake of rapid surge, people should follow the Covid-appropriate behaviour and eligible beneficiaries should come forward for the vaccination.”

Dr Sumeet Singh, District Epidemiologist, said the positivity rate in the district had been around 10 per cent. “In August last year, the positivity was recorded around 11 per cent which has been the highest so far. Currently, the district is witnessing a similar trend and heading towards the peak.”

Sources in the Health Department said the government was planning to impose weekend lockdown in the wake of rising cases. However, there would be no changes in the timings of the ongoing night curfew.