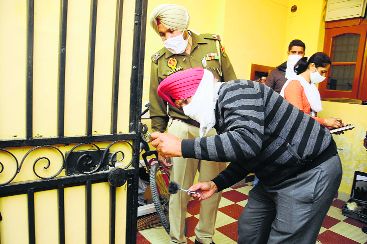 A 45-year-old woman was found murdered at her house in Partap Nagar here this morning. Her 13-year-old son, who was injured in the attack, is battling for life.

According to the police, the victim, identified as Jaswinder Kaur, was residing with her son Jot. Her husband, an Army man, is posted in Himachal Pradesh.

“Since morning, she was not answering any call on her mobile following which her relatives became suspicious and went to her house. On reaching there, they found her lying in a pool of blood,” said Sukhwinder Singh, SHO, Civil Lines police station.

In his complaint to the police, Gurdyan Singh, a relative of the victim, accused Gursewak Singh and Gurmeet Singh, both residents of Nanansu village, of the murder. A case has been registered them under Sections 459, 302, 307 and 34 of the IPC at the Civil Lines police station.

The woman’s body bore injuring marks, seemingly inflicted with a sharp weapon. There were similar marks on the boy’s body also, said the police.

“The victim’s relatives alleged that the murder is an outcome of personal enmity as the woman had filed a property-related case against the suspects,” said the SHO.

The police are conducting raids to arrest the suspects.