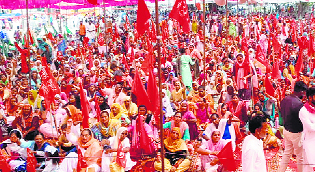 Members of the Communist Party of India (Marxist–Leninist) Liberation stage a dharna in Patiala on Thursday. Tribune photo: Rajesh Sachar

Bhagwant Singh Samaon said the Punjab Government should waive loans taken by women from private finance companies. He said, “The government should also direct police officials to not disturb and harass women by visiting their homes for recovery of loans.”

Ruldu Singh Mansa, state president of the Punjab Kisan Union, said people had raised questions against the government’s newly implemented farm laws. “Farmers, labourers and other people have raised protest against such laws of the Central Government”, he added.

The party leaders also announced support to Punjab bandh call given by various organisations on October 10 in relation to the alleged post-metric scholarship scam.