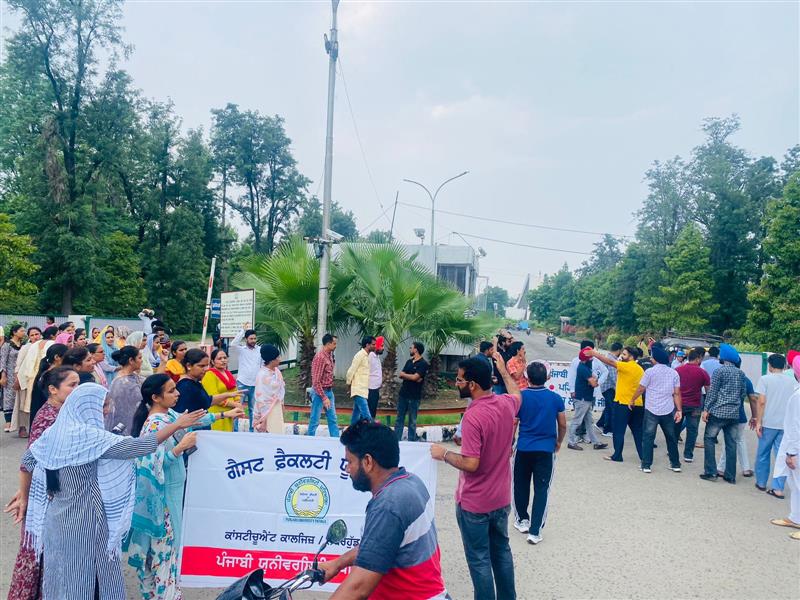 Guest faculty members protest to press for their demands at Punjabi University in Patiala on Monday. Tribune photo

Security guards today shut Punjabi University entry gates as a mark of protest over their demand for regularisation. Later, police officials also reached the campus to ensure law and order.

Meanwhile, the university after declaring protests, organised by groups other than PUTA and non-teaching employees union, as illegal days ago, today gave protesting guest faculty an ultimatum to end their stir by Wednesday. Work remained affected on the campus on Monday.

Security guards have been protesting for the last eight days for promotion from ad-hoc basis to regular employees and provision of gazetted holidays and payments for uniforms. Security guards said they shut university gates for four hours from 7.30 am to 11 pm. Arvinder Singh, one of the security guards said, “We have been protesting for days and decided to shut university gates today. Later, police officials, including the SHO, Urban Estate, the SHO Sadar, the DSP and police commandos also reached the campus. We allowed students to enter campus as they were supposed to take exams.”

He said the university later agreed to most of their demands. “As such, we have decided to end the stir. Some matters will now be discussed at the Syndicate meeting”, he added.

University officials also said they would reconsider some employees’ demands.

Insiders said the guest (lecture based) faculty of constituent colleges, who had been protesting for over 27 days, also blocked university entry gates. The guest faculty said they were being pressurised to end their stir. “The university has started pressurising colleges. Today, they also released a notice to end the stir by Wednesday without agreeing to our demands. Our protest is legitimate and is being carried out while adhering to norms. We will intensify the stir if they fail to agree to our demands,” said guest faculty.

Representatives of the university said the guest faculty were no longer on its rolls and if they failed to end the stir within the given time, appropriate action would be taken against them in this regard.