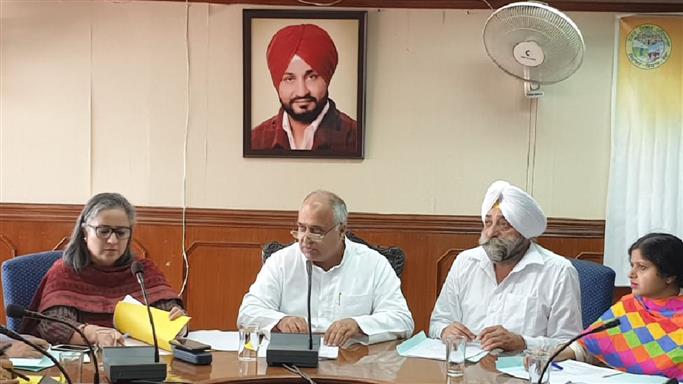 Mayor Sanjeev Sharma during a meeting of the Finance and Contract Committee in Patiala on Thursday. Tribune photo: Rajesh Sachar

The Finance and Contract Committee (F&CC) of the Patiala Municipal Corporation, at its meeting held here today, decided to install PVC speed humps on various roads in the city. The matter was passed prior to deciding the particular places for the installation. The MC has also decided to bear all electricity expenses of more than 42 public toilets in the name of avoiding its misuse. The MC will construct an office building at the existing fire brigade station.

In the 30-minute meeting, 37 agenda items worth Rs11 crore were discussed and cleared. “Some agenda items were not even read out,” an insider said. The MC decided to spend Rs6.50 lakh on installation of PVC speed humps on various roads in the city. Municipal Commissioner Poonamdeep Kaur said, “The specific locations for the speed breakers have not been decided. The fund allocation and decision has been made in advance. They will be installed where speed controls are desired. Earlier, the MC had installed speed breakers all across the city by flouting the IRC norms. Now, the civic body will follow the specifications laid down by the Public Works Department.”

The Municipal Corporation decided to increase the payment for the maintenance of over 42 public toilets in the city. The contractor has been allowed to keep two persons at each unit for maintenance. As per demand raised by the contractor, the MC has decided to bear electricity expenses at the units in order to avoid its misuse. The MC Commissioner said the civic body would install meters and check the expanses. “The contractor was submitting inflated power bills,” she said.