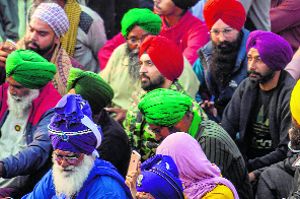 Punjabi star Diljit Dosanjh today joined the farmers’ protests at Delhi’s Singhu border and asked the demonstrators to be patient and peaceful in their agitation and requested the government to accept their demands.

Days after engaging in a bitter Twitter fight with actor Kangana Ranaut over the farmers’ agitation, Dosanjh went to the protest site and initially sat among the crowd and listened to the speeches by other leaders. The 36-year-old actor then took the stage and started his address in Punjabi.

“I am not here to talk but only listen. You people are creating history once again. I used to listen to stories that Punjabis are full of energy but I’m witnessing it for the first time,” Dosanjh said. To the agitating farmers, his message was: Be patient and peaceful in your protests.

“This is the only way we can win this fight. Stories of these days will definitely be told in future,” he said, while thanking the people who joined the protest from Haryana.

Referring to his ugly war-of-words with Ranaut, Dosanjh said unlike the narrative being spread on Twitter, the farmers’ agitation had been peaceful. “Please don’t divert issues. The government should accept the demands of the farmers,” he said. — PTI