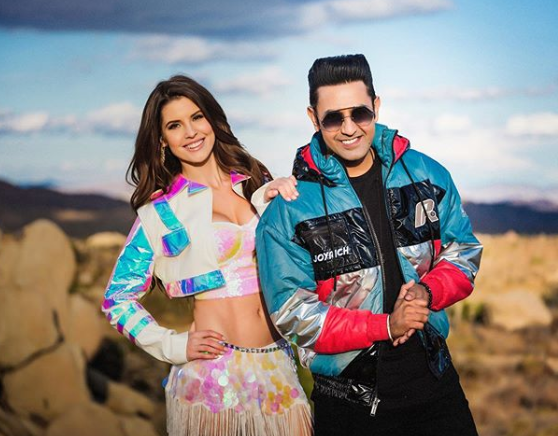 Gippy Grewal's latest Punjabi number ‘Where Baby Where’ is finally out, which also features the American beauty Amanda Cerny.

The flirty number had Amanda swaying to the Punjabi music.

The track has been written and composed by Jani. Further, Sukhe Muzical Doctorz gave music to it while Baljit Singh Deo worked on the video of the song.

In a post on Instagram, the social media influence, Amanda thanked Gippy for welcoming her to the Punjabi “culture”.

Sharing the video, Amanda wrote: “Ahhh this was so fun! Thank you for welcoming me into the culture and making me a part of Punjabi history! @TheHumbleMusic Presents New Year Gift For fans .. A Song #WhereBabyWhere @GippyGrewal Feat. @AmandaCerny Out Now

Amanda is an actress, and a YouTuber, who is famous for her vines, comedy sketches on her YouTube channel.

With her unique and comic videos, she has around 2.6 million subscribers on her YouTube channel.

Recently, Amanda got featured in the official video of Cardi B, “I Like It” along with J Balvin and Bad Bunny on 12th June 2018. With Amanda’s increasing popularity, she has amassed around 26 million followers on her Instagram account.

Meanwhile, on the cinematic front, Gippy will be hitting the big screens next month with ‘Ik Sandhu Hunda Si’.

Troops of the battalion which held back the People’s Liberat...