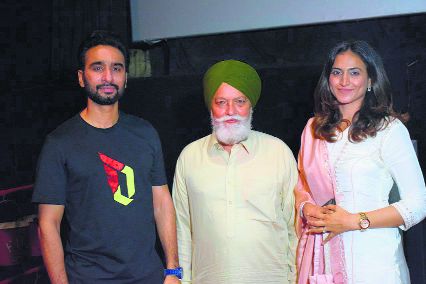 Theatres have opened their doors once again for the cinema-lovers with Punjabi movie Tunka Tunka being screened on Thursday. After Bollywood’s sport drama, Toofaan, this one is another film which encapsulates the journey of an athlete, a cyclist, who from being fit falls prey to a chronic disease and fights for survival.

Expressing his joy in receiving the news that his film went houseful during the first show at Piccadilly Square, Chandigarh, and in Amritsar, the director, Garry Khatrao, says, “It was an honest attempt from our side to provide something fresh to the audience. We have done our bit to give something different, now it’s their turn to return the favour by sharing the reviews through social media.” The film stars actor and singer, Hardeep Grewal as Fateh Singh Sidhu, and marks the debut of Hashneen Chauhan as a lead heroine. It also has Sardar Sohi and Sameep Singh in supporting roles.

While the show starts from today at Elante Mall, it was released yesterday in the theatres across Punjab and other parts of India. Manager from VR Punjab Mall, Mohali, informs that they will soon be opening cinema halls, once the guidelines arrive. He adds, “We have been told to be ready as the guidelines can come any day.

Directors have waited far too long to make their films see the light of the day. Garry adds, “We were willing to release it by July 16 initially when it was speculated that theatres will be opening, but the wait has been long.”

Actress Hashneen, who hails from Patiala, recalls the entire shooting schedule as a wonderful experience. “I am glad that I started my journey with this movie,” she beams. Avijeet Kajal, who went to Piccadily to watch the film with his friends, says, “It’s great to see some serious stories coming from Punjabi directors and writers.”

Meanwhile, a spokesperson from PVR informs that in 50 per cent of the theatres that were open on Thursday, the film witnessed 20-30 per cent occupancy in each show. Many theatres will be opening during the coming week and a few like Elante Mall will start the shows from Friday.