Several Punjabi celebrities have come out in support of the agitation 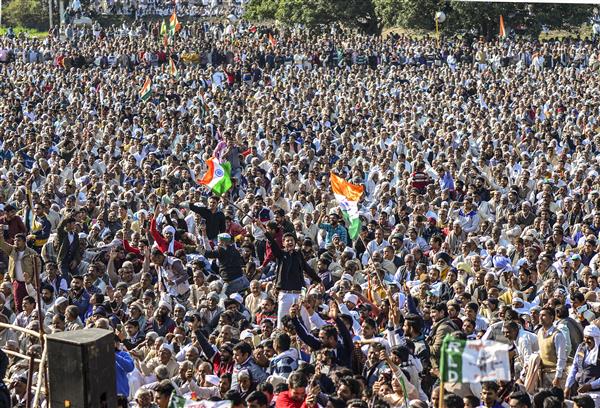 Thousands of farmers from Punjab, Haryana and other areas have stayed put at various Delhi border points, protesting against the new farm laws. — PTI

‘Ailaan’, the song sung by Kanwar Grewal, has been taken off the video-sharing platform YouTube. The song raises voices against the farm laws introduced by the government.

Himmat Sandhu’s 'Asi vaddange' was also removed from the site.

The songs have legal complaints filed by the government against them.

Since September 25 last year, protests have emerged against the farm bills. Several Punjabi celebrities have come out in support of the agitation, and have released songs to that effect.

Songs like ‘Kisan anthem’, ‘Punjab’ by Sidhu Moosewala, ‘Zaalam sarkaran’ by Gippy Grewal have helped in keeping spirits up.

Another such hit is “Asi vaddange” by Himmat Sandhu, a Punjabi lyricist and singer.

The song was released four months ago in support of the farmers' protest. The song talks about the brutality of the government against the farmers and warns the government not to enter the fields, or they would be butchered.

The song has over 13 million views since its release and has become an anthem for the protest, and is often played by the youth on tractors marching towards the capital city.

Another number which has been deleted is ‘Ailaan’.

Kanwar Grewal has been actively participating, and has emerged as a leader, during the protests for youth.

His song has over one crore views.

Songs have played an important role in keeping the mood up. Deletion of this song has come as a shock.

BKU Ekta Ugrahan state secretary Shingara Singh Mann condemned the move saying the government can remove it from YouTube but it cannot erase these songs from the hearts of the people.

He thanked Punjabi artistes and singers for standing with the protesting farmers.