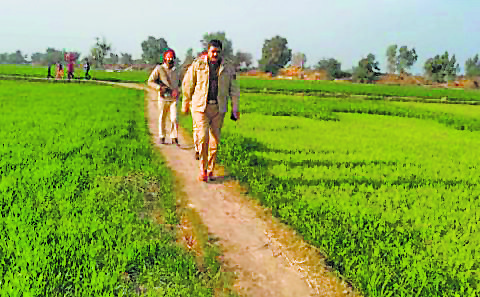 A massive search operation was launched by security agencies following the sighting of “drones” at Tendiwala village near border outpost Shameke in this sector last night. Sources claimed that the drones were sighted twice around 8.48 pm yesterday and later around 11 pm in the same area.

They said BSF jawans belonging to the 136 Battalion opened fire at the flying objects to bring them down. Later, a joint search operation by the BSF and the Punjab Police was carried out, which continued till late this evening, but nothing substantial was found.

As per information, around 150 Punjab Police personnel, led by Baljeet Singh Sidhu, SP (Operations), along with BSF jawans searched the entire area along Tendiwala village.

Ferozepur SSP Vivek Sheel Soni also visited the spot and conducted a tour of various villages along the border to take stock of the situation. He said the police had received information regarding the sighting of drone-like objects following which the search was carried out to rule out any misadventure from across the border. “We have asked the villagers to report if they found something suspicious,” he said.

BSF DIG Sandeep Chanan said though some flying objects were seen, it could not be ascertained whether they were drones or something else. He confirmed that the troops fired some rounds towards the objects and the search operation was still on.