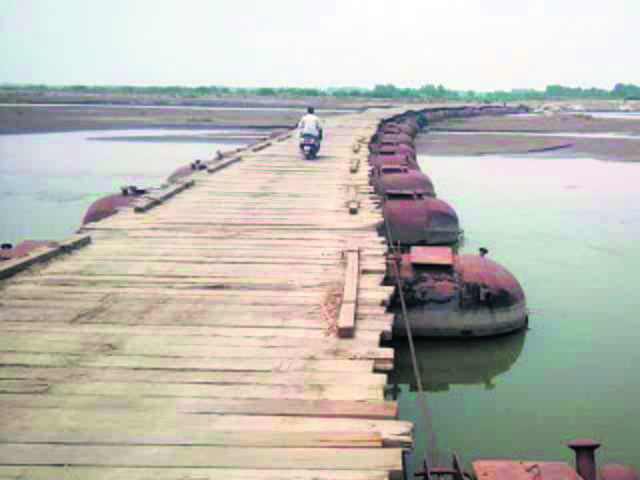 The pontoon bridge on Ravi.

Crammed between the disquiet of the International Border (IB) and the perennial threat of the gushing Ravi, over 4,000 inhabitants living in a cluster of a dozen villages are in for better days.

An 800-metre-long concrete bridge will soon come up to connect the villages with mainland Gurdaspur. All mandatory permissions have been granted for the project.

For long, the Army had been reluctant to give its nod given the exigencies of the IB. Everything has now fallen in place and a grant of Rs 100 crore has been released under the Central Road Infrastructure Fund. The construction work will be executed by the state PWD.

Officials normally address these villagers as “children of a lesser god”. For the past several decades, neither the local administrators nor politicians took interest in their well-being. “We are considered lesser mortals. We cannot educate our daughters and have no access to decent health facilities. Besides, we are looked down upon as if we live in some strange alien land,” says Ranjit Singh, a resident of Lassian village.

Villagers remain totally cut-off from Gurdaspur for the entire duration of the monsoon following the demolition of a pontoon bridge. The wheels of life come to a halt for over two months every year. So much so, worried parents do not risk sending their daughters to colleges on a boat and rather prefer to marry them at a young age.

Every elections, candidates of all political parties promise to get a bridge constructed to mitigate the sufferings of the locals. The moment the votes are counted, all assurances are conveniently forgotten.

Sources claim local MP Sunny Deol is the spirit behind the venture. He approached the Surface Transport Ministry, besides taking up the matter with Defence Minister Rajnath Singh.

Deol’s PA Pankaj Joshi said, “Once the bridge is constructed and road transport begins, the economy of the area will see a turnaround.”

“The tendering process is scheduled to be completed in December,” an officer said.