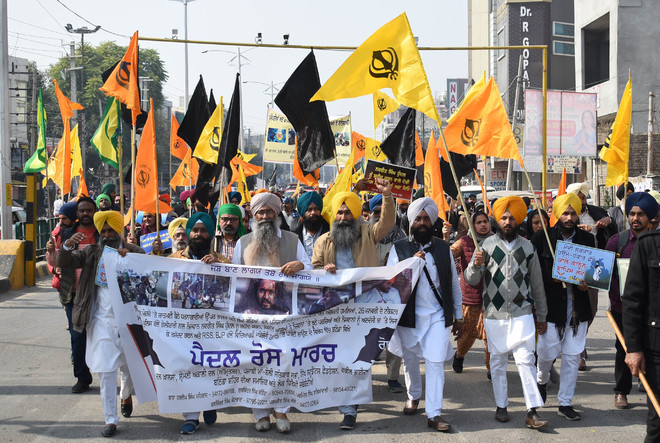 As many as 120 persons have been arrested in connection with the farmers’ agitation and have been kept at the Tihar jail, claims a list released by the Lawyers For Farmers, the formal standing counsel for the farmers.

The Delhi Police, meanwhile, said 44 FIRs had been registered and 122 persons arrested till now, whose details were available on their website.

As many as 300 advocates have formed a group to fight for the persons who have been arrested, illegally detained or have been missing during the farmers’ protest at Delhi.

A separate team of lawyers from the Delhi Sikh Gurdwara Management Committee is also fighting the farmers’ cases. Both Lawyers for Farmers and DSGMC president Manjinder Singh Sirsa have appealed to missing persons’ relatives to approach them. The Lawyers for Farmers, which has set up a desk at Singhu, today filed a writ in the Punjab and Haryana High Court, questioning the suspension of internet in many Haryana districts.

“We have so far received calls from at least 300 families. However, the number of persons traced so far is 120. We are trying to ascertain how many are exactly missing. At least 120 persons have been lodged at the Tihar jail,” said advocate Hakam Singh, a member of the Farmers for Lawyer. “We are going to file a petition in the Delhi High Court on Tuesday regarding the life and liberty of peaceful protesters. We are also working to file petitions to demand a medical board for a thorough check-up of the arrested,” he said. — TNS

Bathinda: Various Sikh organisations on Monday took out a protest march in Bathinda and demanded the cancellation of the cases registered by the Delhi Police against farmers and their leaders over the Republic Day violence. They also demanded their immediate release. TNS