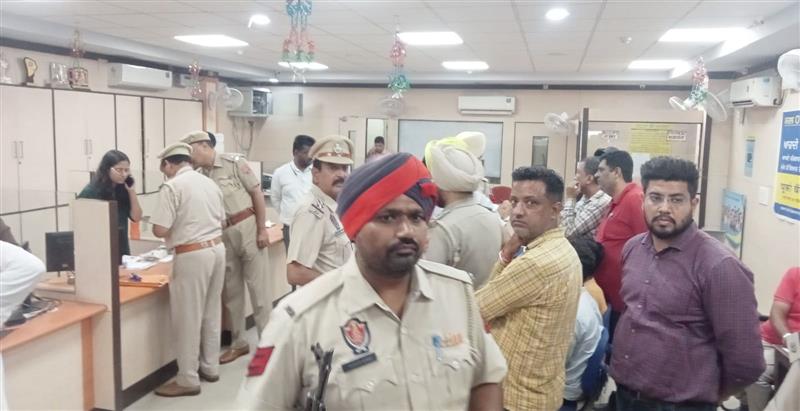 The police record statements of bank officials in Jalandhar on Thursday.

Three masked men robbed a bank after making the staff and visitors hostage in broad daylight in Jalandhar on Thursday. The armed robbers took away Rs 13 lakh from the UCO Bank located at Sodal near Industrial Area. The incident occurred around 3.50 pm.

According to information, one of the three robbers came inside the bank posing as a customer, who later informed his accomplices who came armed in the bank. While one of the robbers broke open the cash box, the other two held the staff and visitors’ hostage at gunpoint.

The miscreants also snatched a gold chain and two gold bangles at gunpoint from one of the woman employees of the bank. They also threatened the visitors to give away their gold ornaments, but were unsuccessful in their attempt. Later, they immediately fled the spot on an Activa scooter, in which they arrived.

DCP Investigation Jaskiranjit Singh Teja said: “The police teams were scrutinising the CCTV cameras installed inside the bank and in nearby areas to find any clues. A forensic team also reached the spot to collect evidence which may help to identify the suspects. They will be arrested soon.”

Meanwhile, in gross negligence and despite police having held a meeting with all bank managers of the city recently about security arrangements, the bank was not having any security guard and neither there was any provision of emergency siren.