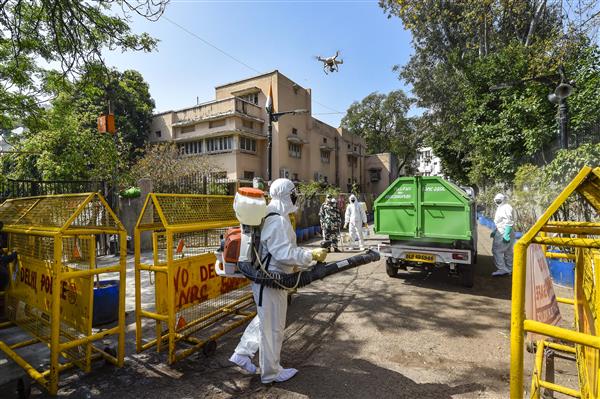 Health workers prepare to sanitise an area near Nizamuddin mosque, after people who attended the religious congregation at Tabligh-e-Jamaats Markaz, tested postive for COVID-19 in New Delhi on Wednesday. PTI photo

District administration has quarantined some 14 people who recently attended a religious congregation in Delhi that has threatened to increase the number of coronavirus cases in the country exponentially.

The 14 are believed to have come to Muktsar from Meerut on March 21 and have since been staying at a local mosque. They were quarantined after some local Muslim leaders informed the district administration of their stay there.

“When we asked these people today whether they had attended the Tablighi Jamaat congregation in Delhi, they said they had just marked their presence there. They’ve been here since March 21. We the informed the local SDM, who’s now collected their samples,” Syeed Mohammad, president of Muslim Intezamiya Committee Jama Masjid, Muktsar, said.

Muktsar Deputy Commissioner MK Aravind Kumar said they had shown no symptoms of the virus so far. “Still, we’ve asked them to remain inside the mosque for 14 days”.

Nizamuddin area has emerged as one of the hotspots for coronavirus outbreak since the ‘markaz’ or gathering of Tabligh-e-Jamaat was held there, prompting many states to launch a massive search for the attendees.

India, which had been at 1,024 cases until Monday, saw a jump of 373 cases in a single day after several states, including Delhi, began reporting confirmed cases involving people who had been at the Nizamuddin Markaz.

Close to 281 foreigners, including from Indonesia where Tablighi Jamaat activists tested positive for coronavirus, attended the gathering with 10 deaths across India now associated with attendees here.