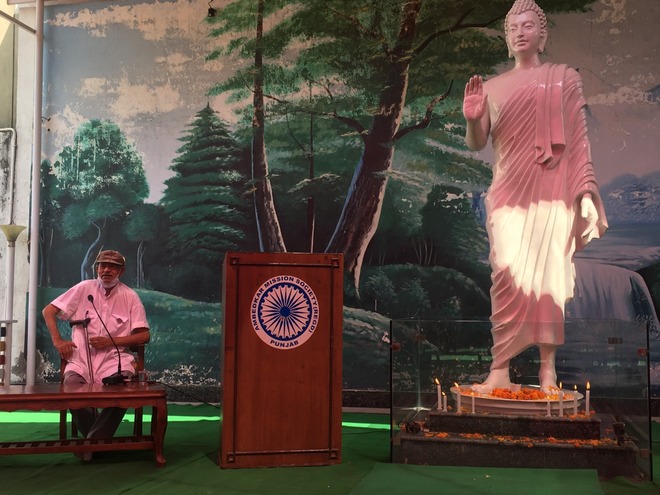 A ‘Pravartan divas’ event being held at Ambedkar Bhawan, Jalandhar.

The ‘Pravartan divas’ on October 14, 1956, when Dr BR Ambedkar embraced Buddhism at Deekshbhoomi, Nagpur, along with 60,000 of his followers, sparked a revival of the religion in Punjab.

One of his oldest living associates, Lahori Ram Balley, began publishing the Bheem Magazine in 1958. It is the legacy of these Ambedkarite Buddhists which continues in the state even after all these years.

However, of the 37 per cent Dalit population in Doaba, very few are Buddhists. An event held at Ambedkar Bhawan to commemorate the event today saw a gathering of 40 to 50 people.

As many as 5,000 people embraced Buddhism at a huge event frequented by Ambedkar’s associates at Chak Hakim village in Phagwara on June 17, 1963.

Lahori Ram Balley, who himself embraced Buddhism at the 1963 event, said: “After that, a ceremony in such huge numbers hasn’t happened. Buddhism is the voice of rationality and logic which Babsaheb advocated.”

Balley added: “A handful of loyal Buddhist Ambedkarites carry forward the message. But it is a trying time for minorities in the country and Buddhists also undergo a similar crisis.”

Ramesh Sidhu (75), an Ambedkarite Buddhist and editor/publisher of Bodh Dharm Pracharak (started in 1987), said: “There was a Buddhism revival following Ambedkar’s embracing of the religion. The Dalit Ambedkarite identity is intact. But it would be wrong to say the Buddhist Amedkarite legacy is doing as well.”